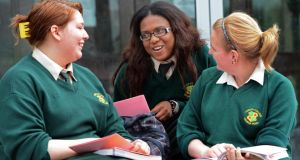 Students were satisfied with yesterday’s second higher- and ordinary-level Irish exams despite two grammatical errors on the paper, according to Robbie Cronin, subject representative for Asti.

“There was a grammatical error four lines from bottom of first column in yesterday’s first comprehension –‘an lá a bhfuair sé’ – should have read ‘fuair’, without “bh”,” Mr Cronin said.

“On the ordinary level paper, a comprehension about John F Kennedy contained the sentence ‘bualadh a bhád patróil agus rinneadh damáiste mór dó’. The correct verb there would have been ‘buaileadh’.”

Students could have repeated the error upon answering a subsequent question, Mr Cronin added.

Overall, the higher paper was welcomed by students and teachers.

Apple founder Steve Jobs was described as both a “fionsamh” (entrepreneur) and a “fealsamh” (philosopher) on yesterday’s higher-level Irish paper 2, in an exam that was praised for its topicality and accessibility.

“The questions varied in range of difficulty but gave everybody a decent chance,” Mr Cronin said. “An interesting article and students loved it. It was informative and yet challenging.”

“Last year’s exam was not contemporary, it has been archaic in previous years. This year was much more accessible,” she said. Ms Morrissey is a subject representative for the Teachers Union of Ireland.

Notwithstanding modern themes, students were also pleased to see a question on Oisín and Tír na nÓg, from the enduringly popular canon of Irish folklore.

“The consensus within my group of students was that this was a really nice paper.”

There was also a comprehension on the 40th anniversary of Raidío na Gaeltachta on the higher level paper.

The ordinary-level Irish paper 2 also contained some lively themes, such as an article about athlete Fionnuala Britton and the visit to Ireland of JFK.

A poem by Nuala Ní Dhomhnaill was accompanied by questions very similar to those that appeared in this year’s pre-exams.

This is the second year that students clock up 40 per cent of their overall grade through an oral exam that was held after Easter. Students prepare oral presentations on a series of picture sequences which, teachers have commented, provide good material for the written exam as well.

“I think the students are handling the new oral format very well,” Ms Morrissey said. “It’s great that they are being rewarded for their ability to speak the language.”

Students of higher and ordinary Irish take the same oral exam and examiners are not informed of their exam level.

The National Council for Curriculum and Assessment is inviting feedback from Leaving Cert students on the oral exam as part of its review process. The closing date for feedback is this Friday and comments can be logged at ncca.ie.

Of papers 1 and 2 at both levels yesterday, Ms Morrissey said: “I think that this year has been more relevant and much more student-friendly than before. It’s a real challenge to modernise the Irish exam but it’s very important.”