Students from Dublin least likely to get third-level grants 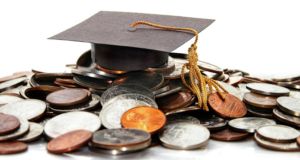 There is research showing that PAYE workers have more difficulty in obtaining student grants for their children compared with farmers and the self-employed. File photograph: Getty Images

College applicants from Dublin are much less likely to get a student grant for higher education than their counterparts in rural Ireland, latest figures show.

Data obtained by The Irish Times from Student Universal Support Ireland (Susi) shows that 71.5 per cent of CAO applicants in Longford last year got a means-tested student grant.

This compares to just 45.6 per cent of applicants in Dublin.

Susi is planning to conduct research into the breakdown of awards after it has finished processing this year’s applications.

The regional difference could be attributed to higher incomes in Dublin and the east coast compared to the rest of the country.

However, there is previous research showing that PAYE workers have more difficulty in obtaining student grants for their children compared to farmers and the self-employed.

Former minister for education Ruairí Quinn drew up proposals that would have seen all assets above a certain threshold considered in means testing but Fine Gael blocked it from being brought to Cabinet.

These figures under-represent the disparity between counties, however, as many school-leavers self-select against applying to Susi on the grounds that they are unlikely to meet the means test criteria.

A more accurate reflection of the rate of success among students in applying for a grant is comparing the number of awards with the number of students who applied to higher education courses from each county.

This is the second year The Irish Times has analysed the counties with the highest number of successful Susi applicants.

Graham Doyle, head of communications and customer service at Susi said there was no obvious reason for this rise but “potentially it could be down to incomes dropping year on year”, leading to more families qualifying.

Earlier this year, Labour TD Joanna Tuffy challenged the Union of Students in Ireland (USI) to take a stronger stance on inequities in the system, saying there were instances of doctors getting grants for their children and bus drivers failing to do so.