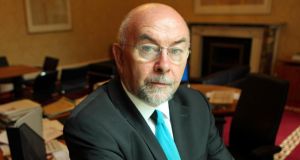 Former minister for education Ruairí Quinn drew up proposals which would have seen assets above a certain threshold be considered in means-testing. File photograph: Frank Miller/The Irish Times

Reform of the student grant scheme has been on the education agenda for decades, but successive governments have shied away from taking action, the Fine Gael-Labour Coalition being no exception.

In 1995, the de Buitléir report found that the means-testing approach was “defective in that it fails to take full account of ability to pay, particularly since it ignores the accumulated wealth of individuals. Some people with clearly expensive lifestyles obtain grants while others, who are very hard-pressed, lose out.”

A 2012 study by the Higher Education Authority (HEA) showed that 40 per cent of farmers and close to 50 per cent of self-employed people secured a college grant for their sons or daughters, compared to 17 per cent in families headed by a “lower professional” and 10 per cent by a “higher professional”.

Quinn’s plans for a capital asset test were strongly criticised by farming groups, including the Irish Creamery Milk Suppliers Association, which promised a “teeth and nail” campaign of resistance.

A number of Fine Gael TDs also publicly criticised Quinn’s plan, and it was no surprise when it was scrapped before reaching cabinet.

There are two main forms of support provided by Student Universal Support Ireland (Susi): a maintenance grant and a fees grant. The size of grants varies according to family income and the distance that students have to travel to college from their ordinary residence.

To qualify, a family of fewer than four children must have an income below €52,240. This guarantees the minimum level of funding, €1,375, or 50 per cent of the annual student contribution.

For a family of the same size with an income below €39,875, 100 per cent of the contribution is paid, along with a maintenance grant of up to €3,025 and the cost of compulsory field trips.

The HEA is currently drawing up a new strategy on access to higher education, in which the fairness of the grants system is due to come under renewed scrutiny.