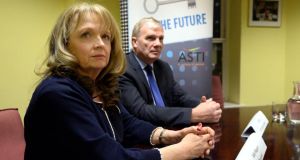 The Association of Secondary Teachers, Ireland has voted to accept the revised Haddington Road agreement by a margin of 57 per cent for and 43 per cent against. The decision immediately removes the potential for any strike action by teachers that could have disrupted classrooms from next January.

The turnout was 64 per cent - an improvement on the previous Asti ballot on Haddington Road which achieved a 55 per cent turnout.

“Members have had to make a most difficult decision,” said the union’s general secretary Pat King. They had cast their ballots in the context of years of education cutbacks and deteriorating terms and conditions for teachers, he said.

He also warned however that any failure by the Government to “meet its commitments” under the Haddington Road Agreement, including any delay in implementing those commitments would be viewed as “unacceptable.” They would be “met with strong action from the union”, Mr King said.

The decision caught many by surprise given a widespread assumption throughout the day that the union would vote to reject the revised Haddington Road agreement.

Asti had been the only public service union to reject the terms and conditions of the original Haddington agreement. It began low level industrial action in early October in pursuit of a revised deal for its members.

This caused some limited disruption, with parents having to attend parent teacher meetings during school hours rather than after classes.

Further negations prompted a revised deal with the Department making commitments on three main areas. These included the number of teachers on short-term and/or part-time contracts; the establishment of a working group to consider Asti’s concern about junior cycle reform; and a new agreement on best use of the extra ‘Croke Park’ hours to be added to teachers’ work time at school.

Also at issue however was an agreement on supervision and substitution duties, services which used to deliver an allowance to teachers but which under Haddington Road now become one of the core duties of teachers.

These commitments proved acceptable to a majority of the teachers who voted, despite a decision by the union’s Central Executive Council to recommend a no vote from the 17,000-strong union membership.

Rejection of the deal would have put the union and the Department on a collision course that would likely have led to major disruption in the 550 schools where Asti is the main or dominant union.

This could have been prompted by Mr Quinn invoking legislative powers under the Financial Emergency Measures in the Public Interest Act. This would have opened the possibility of surplus teachers being dismissed but also would have stopped payments for supervision and substitution duties.