A program developed by researchers at NUI Maynooth that they say can increase IQ has been bought by schools around the country – but are the claims too good to be true? 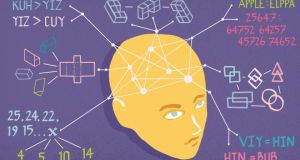 Can you increase your intelligence? It is one of the most rancorous debates in science, with disputes raging over the meaning of intelligence, the value of IQ tests and whether brainpower is influenced by genetics or environmental factors.

Now researchers at NUI Maynooth’s department of psychology say they have discovered a new and surprisingly simple way for people of all ages to significantly boost their IQs, using a specially developed computer program. If their claims can be verified, they might be on the cusp of bringing in a lot of money.

The hoped-for breakthrough comes back to how we understand the relationships between things, says Dr Bryan Roche, a lecturer in psychology at NUI Maynooth. According to Roche, relational skills – comparing sizes, looking at opposites, deriving connections – are central to how humans understand the universe and the very nature of existence.

The findings have potential implications for language acquisition, literacy, numeracy, reasoning and problem-solving. Roche says his team have discovered no less than the building blocks of intelligence. These are audacious claims.

Working with NUIM colleague, psychologist and licensed psychometrician Dr Sarah Cassidy, Roche created Smart (Strengthening Mental Abilities with Relational Training), a series of computer training programs that have been developed into a single online game, suitable for children or adults, which develops relational skills. “People assumed, for example, that you learn maths and then, after this, come to understand basic concepts like more than, less than and opposite,” says Roche.

“Because of this, the education system generally focuses on teaching content: how to add and subtract, how to put letters together to form words, how to string words together to express meaning. But it has become increasingly clear that children, or anyone learning, starts with the basic concepts first.”


Too good to be true?
Roche believes that almost everything we do – from speaking to counting coins, being kind to one another or pondering existential angst – comes back to how we understand the relationships between things. These ideas have applications across the range of multiple human intelligences, which include visual, interpersonal, kinaesthetic, logical and existential.

The claims have a familiar feel of being too good to be true. Parents with children who struggle at school may be particularly keen to improve their intelligence and might already be rushing out to buy this product. But where’s the evidence ? Should they wait?

The program has been bought by schools around the country, but has been tested only on relatively small groups, including a four-month long intervention with 15 children at Rathmore National School in Co Meath.

Even with repeated practice at IQ tests, most people don’t improve their IQ by more than 10 points. The team at NUI Maynooth say they have recorded rises far beyond this, however. At Rathmore, researchers recorded an average IQ rise of 23 points. Roche says students who had learning difficulties or were on the borderline of being diagnosed intellectually disabled, jumped from 70 or 80 IQ points to as high as 110. Relational skill scores also increased.

The Smart system is underpinned by relational frame t heory. Tied in with ideas developed by the influential behavioural psychologist BF Skinner, the theory says that the development of relational skills is critical to intellectual development.


The Leixlip trial
Some schools around Ireland are buying the Smart software on a private basis. The biggest trial of all is under way at Confey College, a post-primary school in Leixlip, Co Kildare. The principal, teachers, staff, students and parents have all taken a leap of faith and adopted the program. All staff, including ancillary staff such as caretakers and secretaries, are undergoing training. The school has invested significant resources in Smart. The pilot phase has been scheduled for three to five months, involving 130 students and 25 teachers in first, second and fifth year.

At the beginning of the trial, students had their “proxy IQ” measured using a standardised test but, in an interesting twist, they have not been told how they scored. Students are spending three class periods per week working on a series of tests and questions. Students with special educational needs are also being assessed.

At the end, their IQ will be measured again. Although the test groups are still relatively small for such a significant claim, the results will be instructive.

“The claims that have been made in relation to Smart are huge,” says school principal Niall Hare. “They are saying that, for the first time, people can be made more intelligent. There is a lot resting on this – not least for this school.”


THE IQ TEST: A CONTROVERSIAL HISTORY

Is IQ fixed for life? When it comes to the behavioural sciences, this very suggestion has a murky and controversial history.

Throughout the 19th and 20th centuries, psychologists and scientists often claimed that people from Africa had a genetically lower intelligence. This attitude was based on generations of questionable evidence, faked tests, skewed data and inherent biases.

Cultural differences, as well as the fact that IQ tests were designed by white, male Europeans, also explain some of the findings. The majority of researchers now accept that IQ tests are culturally biased.

The issue is laid bare in Stephen Jay Gould’s 1981 work The Mismeasure of Man. Modern science, including the latest data from the American Psychological Association, clearly shows that intelligence is not related to the colour of one’s skin.

Whether intelligence can be increased also has implications for equality: if intelligence is innate and genetic, it can be used to justify social inequality.

There are also issues relating to differences in the intelligence of men and women.

The NUI Maynooth researchers are not the first scientists to make claims about how intelligence can be improved. In 2008, researchers at the University of Michigan at Ann Arbor claimed they had discovered a brain-training task that increased the ability to reason.

Last year, however, a study published in the US journal Psychological Science backed up other studies that showed that, while brain-training games and exercises have been shown to boost working memory, they have not changed intelligence. A magic pill for intelligence doesn’t exist – not yet, anyway. But if, or when, it is found, its inventors stand to become very wealthy.