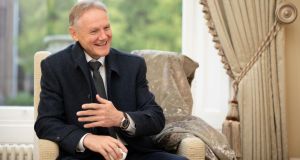 Joe Schmidt said he believed students benefited from being able to learn to cope under a certain amount of pressure. Photograph: Alan Place.

Outgoing Ireland rugby head coach Joe Schmidt, a former teacher in his native New Zealand, has said his son is reaping the benefits of the Irish transition year (TY) system.

Luke Schmidt (16), who underwent major brain surgeries after being diagnosed with a severe form of epilepsy at the age of four, is now in transition year here.

“He’s loving it, it’s a good challenge for him. I think it just allows them to mature a little bit during that year. They’re still pretty young to make decisions about a career, but at least they dip their toe in,” Joe Schmidt said.

Luke Schmidt, through TY, is currently participating in Toastmasters, which promotes public speaking skills and communication. This has also boosted his self-confidence, his father added.

TY was introduced in 1994 as a bridge between the junior cycle and the two-year Leaving Certificate programme.

Schmidt was guest of honour at University of Limerick on Saturday where 125 students received all-Ireland scholarships sponsored by horse-racing magnate JP McManus.

In an interview with The Irish Times, Schmidt described the Leaving Certificate programme as “pressure-cooker years” for students because they can get consumed by the notion that their entire future depends on getting top marks. “It’s a major stress.”

However, the father of four said he believed students benefited from being able to learn to cope under a certain amount of pressure to help prepare them for the normal stresses of life.

He is a firm supporter of the New Zealand education system which, he said, has moved from mostly end-of-year final exam assessment to a broader mix of modular assessment, as well as final exams.

Schmidt described himself as a “disciplinarian” in his previous career as a teacher, and later as deputy principal of an all-boys college. He admits to having been a lazy student, who “just wanted to be outside the classroom tearing around”. But he became a “hard-working” teacher.

“I was a disciplinarian maybe, but I just think I was consistent. As long as you got that paper [assignment] into me, you were fine.”

He said: “Education can end up in a bit of a silo, an academic silo. More and more people are saying its EQ [emotional intelligence quotient]that counts, and not IQ.”

Schmidt said he was all too aware, having been an educator, that young people are under increasing stress.

Not only are they expected to perform to their best academically but they are having to navigate social media, as well as worrying about college fees and finding affordable accommodation.

His eldest daughter Abby (25), a communications executive, lives in New Zealand, but “the others are still living with us”. Ella (22) is halfway through a radiography degree and Tim (23) has recently qualified as an accountant.

“It’s one of the things about living in Dublin, certainly for Ella who is still a student – to live independently is pretty tough.”

He criticised “hefty” rents being charged to students, particularly in the capital, “just to secure a room, not even a flat – that’s an added pressure for young people trying to negotiate their way”.

Schmidt said “wouldn’t discount” a return to teaching at some point in the future.

In his teaching roles he observed the problem of students’ mental health issues become more prevalent.

“None of us really want to talk openly about suicide rates being high, but it’s important that it’s acknowledged because otherwise how do you get the supports around people? And how do you defuse some of that stress that kids are feeling, whether is through maturity, awkwardness, or whether it’s through academic stress or financial stress?”

Schmidt, who himself received a university scholarship after secondary school, told scholarship recipients he was “still hurting” after Ireland’s recent disappointing World Cup performance in Japan.

“Failure is an event, it’s not [the]person, it’s inevitable. We will fail sometimes, but you should not to be beaten back or be beaten down by failures, lose confidence or lose belief, because without those two things it’s very hard to sustain any success,” he told students.