Rule on priority of primary-level religion classes to go 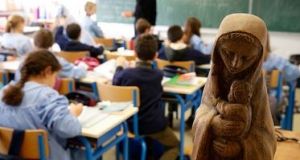 At present, 30 minutes of each primary school day is allocated to religious education - twice the amount of time devoted to subjects such as science or physical education. File photograph: Getty Images

Minister for Education Jan O’Sullivan is to remove a 50-year old official rule which gives religion classes a privileged status, paving the way for a potential reduction in time spent on faith formation.

At present, 30 minutes of each primary school day is allocated to religious education - twice the amount of time devoted to subjects such as science or physical education.

Speaking on Tuesday night, Ms O’Sullivan said she will move next month to repeal “rule 68”, which states that religious instruction is “by far the most important” part of the school curriculum.

“Rule 68 is archaic. I will repeal it,” she said. “It may have survived for 50 years, but in January it will be removed, along with any other rules that don’t speak to the diverse and welcoming nature of our modern school system.”

Ms O’Sullivan said the removal of the rule will likely trigger a necessary discussion on how much time should be spent on religious education in our schools.

“We want our children to develop a strong, ethical spirit, and an understanding of their place in the world,” she said.

“But we also want them to learn many other things. We want them to be physically active and fit, but we devote less than half of the time to PE that is devoted to religion.

“We understand that an early appreciation of science can engage and astound our children in wonderful ways, but science education also gets less than half the time that religion does in our curriculum.”

The issue of religion is schools has become a hotly debated topic in light of growing controversy over the fact that some 90 per cent of primary schools are under the patronage of the Catholic Church.

Parents of non-baptised children or those of minority faiths in some parts of the country have reported major difficulties accessing school places in over-subscribed denominational schools.

Ms O’Sullivan said the Equal Status Act - which permits schools to discriminate on the basis of religion - must be amended to prioritise local children, no matter what their religion is.

“We must build in protection for the small number of minority faith schools which serve dispersed communities - effectively eliminating minority faith education would represent a departure from, and not a move towards, a diverse and pluralist education system,” she said.

She said Labour’s election manifesto will include a commitment to do this and party officials were looking at possible drafts of what that legislation might look like.

Ms O’Sullivan also signalled that a long-awaited school admissions Bill - due to have been enacted before the end of the Government’s term of office - could be delayed in favour of “comprehensive, radical admissions legislation”.

The original legislation did not seek to address the issue of religion, but sought to put an end to the charging of fees to apply for school places and remove barriers that some schools erect in the way of children with special needs.

The legislation also envisaged restricting the number of places that a school could reserve for children of past-pupils.

While Ms O’Sullivan has argued that a limit of about 10 per cent was reasonable, her predecessor Ruairí Quinn believed it should be set at 25 per cent.

“It may be no harm that this is achieved through one piece of legislation, enacted early in the lifetime of the next Oireachtas, ” she said.