Rooms with a view could be the future of school design 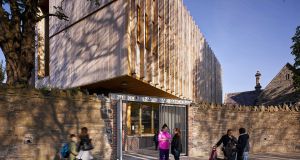 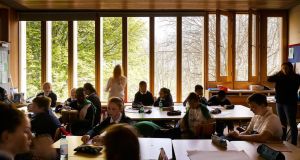 One of the new classrooms in Inchicore National School designed by Dongahy + Dimond. Photograph: Ros Kavanagh

The new building at Inchicore National School could not be further removed from the prefab classrooms that children endured for two decades or more because the original “model school” – built in 1853 – was bursting at the seams. Now, at last, its 210 primary school students are being educated in a truly inspiring environment.

What the single-storey school in west Dublin needed was an extension to provide more classroom space. What it got was a free-standing, three-storey building, linked externally to the old school, with six new classrooms raised above a general-purpose hall.

Not only is this a fine modern building, with classrooms looking out onto the dense canopy of chestnut trees that are so close you could almost touch them. It is also a expert renovation of the old school, restoring the classrooms to their full height as well as carving out a new enclosed courtyard space.

“We wanted the six new classrooms to have a direct relationship with chestnut trees along the boundary as their immediate context, so the new building becomes a kind of tree house, with windows brought down to seat level so the kids could enjoy it,” says Marcus Donaghy of Donaghy + Dimond Architects.

The design sets the bar high for the future of school design. The scheme has been garlanded with awards, including the Architectural Association of Ireland’s Downes medal and one from the Royal Institute of the Architects of Ireland for best-designed educational building.

Imaginative design isn’t the first thing you expect in modern-day school building projects, which are typically bundled into large groups of contracts.

The Government, for example, plans to invest €2.8 billion through 2021 in 310 “high-quality” school projects (new buildings and extensions to existing schools). The goal is to produce an extra 62,000 classroom spaces, thereby eliminating the need for any school to use prefabs on a long-term basis.

It may be driven by cost-saving, but the downsides of the approach is that diversity of design, specific to particular needs and contexts, is in danger of being sacrificed to “identikit solutions”. It also means that some younger architects with really good ideas are being excluded from the process.

Against that backdrop, it was almost a miracle that Donaghy + Dimond won the commission to design Inchicore National School.

The job was centrally advertised in 2005 among a tranche of new schools, but what proved crucial was that the school board made the decision, based on its belief – correct, as it turned out – that the architects were enthusiastic and engaged with the place.

Plus, the board had been advised that it would get a better service from a smaller practice rather than a bigger one.

None of it was easy. The budget, at €2.7 million, was extremely tight. The first building contractor, chosen because he had submitted the lowest tender, went bust in 2011, leaving a nonweatherproof structure standing on the site for 18 months while a “completion contract” was put out to tender. The builder who won it also went to the wall, and the project had to be retendered yet again.

That is a distant memory. Fittingly, the new block is timber-clad in sweet chestnut on its upper levels, cantilevered over the brick-clad general purpose hall to provide a covered walkway. This leads to a canopied ramp, linking new and old, which also ensures that external yards flow into each other.

The staff room at ground level has a big plate-glass window with a view out to the larger yard, which could do with some planting beds.

Dimond was the project architect for Ranelagh Multi-Denominational School while working for O’Donnell + Tuomey Architects, which won several awards for it.

He also teaches a module in educational design at the UCD School of Architecture, where students learn the challenges and the opportunities of designing every building type imaginable, including new schools.

“The assumption that architects who haven’t worked on a particular type of building should be excluded is extremely prejudicial,” Donaghy says. “The department obviously has a lot of knowledge of school building from years of experience. If that expertise can be blended with a variety of architects who have shown appetite and skill in various realms, then school communities in general would benefit.”

Under the PPP model, schools have very little input into the selection of architects – even though they are the clients.

“It needs to become a much more fluid process,” Donaghy insists. “There’s a lot of younger architects out there who could do good schools, but the State, with its current model, is cutting society off from access to this area of expertise and enthusiasm. If it doesn’t take the risk of doing that, we will just get more of the same.”

Will Richard Bruton, the technocrat who is now Minister for Education and Skills, get this essential message from serious architects about the inherent unfairness of this rigid procurement process – and how it is opposed to the public interest in quality and diversity of school design? We shall have to wait and see.

Not far away from Inchicore National School is a real blast from the past: a perfectly preserved classroom from the former CBS in what used to be Keogh Square.

It is complete with paired desks, blackboard and chalk and maps of Ireland, Europe and the world on the wall.

Sitting down briefly at one of the child-sized desks, my own memories of primary school came flooding back.

I could imagine in my mind’s eye a savage Christian Brother giving “six of the best” with his leather strap to some errant child who’d arrived late for class.

St Michael’s CBS in Inchicore operated from 1928 until it finally closed in 2006.

The reinstatement of one of its classrooms was done as part of a general restoration of three buildings from the former Richmond Barracks, where leaders of the 1916 Rising were court-martialled.

Overseen by conservation architects Kevin Blackwood and Margaret Quinlan, the surviving section of the barracks has been brought back from oblivion in collaboration with the community.

The elegant octagonal lantern sitting so neatly on top of the former barracks gymnasium is now a beacon of hope for Inchicore after years of disappointment over the failure of a housing PPP to regenerate St Michael’s Estate; it fell apart after property developer Bernard McNamara went bust.

A new visitors’ centre commemorating 1916 has been installed beneath the lantern, using interactive multimedia to tell the story of the site from military barracks to housing estate and from school to exhibition centre.