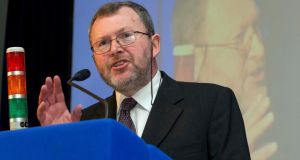 TUI general secretary John MacGabhann said behaviour by some students “puts the health and safety of other students and of teachers at risk”. Photograph: Dylan Vaughan


Increased pupil-teacher ratios and a reduction in middle- management posts are undermining the ability of schools to deal with abusive and threatening student behaviour, the Teachers’ Union of Ireland has said.

Speaking ahead of the union’s annual congress next week, TUI general secretary John MacGabhann said: “Teachers are expressing concern at the effect of cutbacks and an apparent lack of will – or ability – by school management to deal with the issue of indiscipline problems in schools.”

He added: “We are talking about dangerous behaviour that severely restricts teaching and learning and puts the health and safety of other students and of teachers at risk.

“It could take the form of verbal abuse, threatening or intimidating behaviour or even, in some cases, incidents of violence towards other students or teachers.”

MacGabhann said the cutting of teacher numbers, the removal of vital middle-management posts such as year head and the abolition of ex-quota guidance counselling provision to schools had all contributed to a situation that simultaneously made the occurrence of unacceptable behaviour more likely and the capacity for effective early intervention in schools increasingly difficult.