Refusal by teachers to assess students is a ‘step back’, says Finnish expert 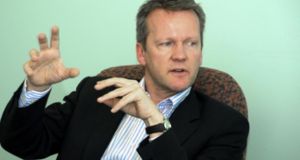 Pasi Sahlberg: “Judgment regarding how well students have learned and grown in school is a fundamental part of teachers’ professional portfolio”

Teaching in Ireland cannot be regarded as fully professionalised until teachers change the way they assess students, according to renowned educational expert Pasi Sahlberg. On plans by teachers to hold a second strike next week on junior cycle reform, the Finnish educator and scholar said “judgment regarding how well students have learned and grown in school is a fundamental part of teachers’ professional portfolio.

“By resisting to take the responsibility to assess and grade students’ learning in school is a step back in making teaching truly a high profession akin to medical doctors, lawyers and architects, for instance.”

Dr Sahlberg, a visiting professor of education at Harvard University in the US, was speaking to The Irish Times after a recent visit to Ireland where he met various education stakeholders.

The two trade unions representing secondary teachers the ASTI and the TUI are to close schools on Thursday, January 22nd, following a one-day strike last month, in protest at the junior cycle reforms. While many of the unions demands have been met, including the retention of State certification for the new Junior Cycle Student Award, they remain opposed to the plan for 40 per cent of marks to be assessed by teachers rather than external examiners.

Dr Sahlberg said the situation in Ireland was “ unique globally in many ways. Internationally it is more common that teachers are the ones that insist more freedom and autonomy in assessing and grading their students rather than the other way round.

“Many countries that have standardised school leaving examination at the exit from lower secondary schools would rather do without it or have more say how their pupils are assessed and graded.”

However, he noted the international experience was mixed and “choosing selectively you can justify any position you like”. Therefore, he recommended that Ireland concentrate on “what is the best for the Irish system in the long run” rather than what other countries are doing.

Acknowledging the “relatively high degree of teacher and leader professionalism” in Ireland, he said: “I would see that the most fitting way forward is to design a completely new form of junior cycle student assessment system rather than debating between external and school-based examination.

“I am saying this with a vision in mind that would shift the paradigm of schooling in Ireland,” thereby creating a model which “emphasizes more holistic, organic and self-directive teaching and learning that is becoming increasingly difficult to be assessed by conventional standardised tests”.

Almost all other stakeholders have come out in support of the reform plan, the latest being the Association of Community and Comprehensive Schools, which represents 95 such schools nationwide.

She said: “Each year we celebrate young scientists – as we did only last week - and their skills are vital to the success of our economy and society. We applaud these young people for their creativity, their problem-solving prowess and ability to research ideas. If these skills are so important and worthy of such applause, should they not be central to our education system?

“Unfortunately, our current system only promotes these as ‘extras’, dependent on teachers’ goodwill, parental support and work being done after school.”

The new junior cycle made space for “active learning” and “puts 21st century skills to the forefront”.

By continuing to “prioritise examination preparation” with the current assessment system, “we continue to teach our children – as we were taught – for a world which is changing, is different, a world of tomorrow we cannot even imagine, while ignoring their lives and real needs today,” Ms Salmon said.

Further talks between the unions and the department of education are to take place on Wednesday, although neither side is optimistic of a breakthrough.