Real world gets a good review 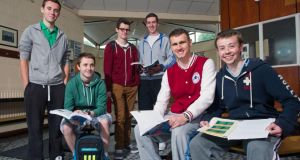 The first full paper of the contentious Project Maths syllabus, which focuses on real world maths applications, has received a positive response from students and teachers.

Elaine Devlin, ASTI subject representative for maths, said the State Examinations Commission appeared to have learned a lesson from last year’s poorly-received maths papers and that this year’s higher and ordinary level exams were much more accessible.

Sample papers
Aidan Roantree, a senior maths tutor at the Institute of Education, said most questions on the higher level paper would have been familiar to students from previous sample papers. He suggested that the exam would have been welcomed by the vast majority of students.

Ms Devlin said most of the questions were fair and approachable, although she and other teachers said that question 9, where students were asked about a shape called an arbulus, was particularly challenging.

Eamonn Toland of TheMathsTutor.ie had a slightly different perspective from some other teachers. “Overall, the higher level paper was quite challenging, with questions written in a style that will demand a high level of understanding and interpretative skill from the students. The section on contexts and applications seemed quite tricky. There was a difficult question on hypothesis testing, and the second geometry question was not easy.”

Online commentary from students suggested the maths exams would be marked leniently. One wrote: “They’re failing nobody . . . because they don’t want Project Maths to look bad.” However, Brid Griffin, TUI subject representative and a teacher at Carlow Institute of Further Education, said this view was misguided.

“It would be remiss of examiners to pass everybody. The people correcting are highly qualified and will adhere to the standards. That said, section A of the paper, which constitutes the majority of marks, does give students a fighting chance of a good grade.”

Ms Griffin said students were relatively happy with the ordinary level paper, which was not too wordy.

Mr Toland said the ordinary level paper was relatively more straightforward and should not have caused problems.