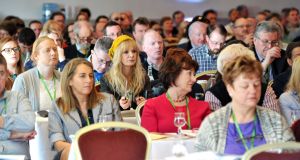 Teachers at many of the State’s fee-paying schools are treated like “second-class citizens” and paid well below official rates, a teachers’ union conference has been told.

Delegates at the annual convention of the Association of Secondary Teachers Ireland (ASTI) heard many teachers at these schools are privately paid out of the schools ’ resources.

As a result they are not covered by official pay scales which apply to the wider profession.

Joe Moran, a member of ASTI’s Tipperary branch, said there was a perception that fee-paying schools were the preserve of the privileged, but this did not apply to teachers.

A significant number of teachers in them had little prospect of securing permanent work and were excluded from pension schemes and benefits.

Many of these teachers were involved in significant amounts of unpaid extra-curricular activity, such as drama and sports. In some cases they were working alongside paid coaches.

Niall Mahon, another delegate, said there were many misconceptions over the way these teachers were treated.

However, it was overturned by the High Court following an appeal by the Catholic University School, a private Dublin school.

Noel Buckley, a member of the union’s central executive committee, said it was a “dark area” of the education sector which needed to be highlighted.

“The reality is many of these teachers are afraid to put their voice out there; they are afraid it will affect their future working conditions.”

Enda Whelton, a member of the union’s standing committee, said the issue could have wider implications for the broader membership.

If Department of Education proposals to give greater autonomy to schools were followed through, it could lead to more privately paid teachers.

“In light of ‘school autonomy’, this is what it will look like for all teachers,” he said.

“Some don’t even know what they get paid . . . they get a package deal to do other jobs in the school . . . They are in a very, very vulnerable position.”

Mary Ohle, another delegate, said some of those on full-time hours were on a salary of about €21,000, about €10,000 below the department’s rate for new entrants on full-time contracts.

“Many don’t see the point of joining a trade union when their pay is worse than that of newly qualified teachers.”

Delegates unanimously supported a motion that the ASTI establish a committee to oversee the pay and conditions of privately paid teachers.