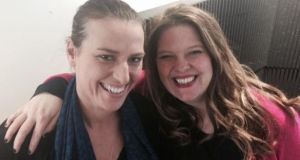 Lynn Ruane with Róisín Ingle of the Irish Times on her election as president of TCD students’ union. Photograph: The Irish Times

Lynn Ruane, a single mother from Tallaght who left school at 15 and was elected president of Trinity College Dublin’s students union earlier this year, is to announce her candidacy for next year’s Seanad elections .

In an open letter to be circulated to students of the college on Tuesday, she will say she has decided to run on the basis that “politics is missing a committed champion of education”.

She plans to stand for the Seanad on the university panel. Of the 60 members of the upper house, three are elected by graduates of the University of Dublin.

At present, they are Senators David Norris, Ivana Bacik and Sean Barrett. Ms Ruane, a mother of two, is a former addiction counsellor and secured a place in Trinity through its access programme for under-represented groups.

“Students and graduates are the driving force of a stable economy yet we continue to factor at the bottom of the agenda for most if not all political parties,” she says in the letter.

“ I want to change that. The social and economic impact of an educated population is too great for me not to take this opportunity and continue the fight for students.”

The Seanad elections are likely to be held in May, one month before the end of her term as president.

Ms Ruane lives on campus with her two daughters Jordanne (15) and Jaelynne (8).

Despite leaving school when she first became pregnant, she went on to lead addiction support and social programmes in Dublin’s south inner city.

She says she left this work to attend university when cutbacks convinced her she would need to “come back in at a different level” to improve addiction services.

After entering Trinity through its access programme, she decided to run for student union president when she found that students are being “treated as revenue and not as students there for an education”.

If elected, she says she will use her remaining annual leave from the union to take up the new position, and will work unpaid for the latter two weeks to train in the new president.