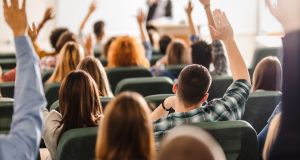 An Gréasán do Mhúinteoirí Gaeilge (The Irish Teachers Network) is seeking a meeting with the SEC and the Department of Education to discuss recommendations it says will improve the newly reformed examination.

Chairperson Shane Ó Coinn, said teachers have expressed concerns in the last week relating to the breadth of material pupils have to cover. They also raised concerns that pupils will be unable to complete it within the assigned two-hour period.

“It’s not that Irish is any harder than other languages, the problem is that the exam is not suitable - especially for those learning Irish as a second language,” he said.

Many teachers were critical of the sample papers when they were issued last Tuesday with some saying a greater level of difficulty will drive pupils away from Irish and will lead to an increase in applications for exemptions from the study of the language for the Leaving Cert.

“There is a danger that a lot of pupils will drop down to ordinary level as a result of this level of difficulty. It won’t help their confidence in speaking the language either,” Ó Coinn said.

Pointing to an increased-emphasis on literature and vocabulary in the exam, which he described as “extremely difficult and too technical,” Ó Coinn said the members of his association were worried that some of the material featured is unsuitable for students who are learning Irish as a second language.

“The exam has to be focused on the target group. If not, it won’t help learning,” he told The Irish Times.

While the previous Irish syllabus included an optional school-based oral examination worth 40 per cent of the overall marks there is no such option under the new reforms.

An Gréasán do Mhúinteoirí Gaeilge has listed a number of amendments it says would help make the new format more suitable for those sitting the exam.

These include fewer questions on the exam paper and the use of more relatable-material, particularly for T2 students. A greater focus would also be placed on reaching a level of proficiency in order for students to be able to communicate and use the language in their daily lives.

“We want to relate the worry and concerns teachers have expressed to the SEC and the Department of Education and are seeking an urgent meeting with them to address the issue,” Ó Coinn added.