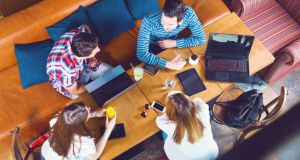 Queen’s University Belfast and Ulster University have indicated a reduction in students places as a result of Stormont budget cuts. Photograph: Getty Images

Northern Ireland A-level students have again outperformed their counterparts in England and Wales and there has been an increase in the number of females students taking on STEM subjects.

Tens of thousands of young people in the North received their A-level and AS-level results on Thursday and will now enters university or colleges, while others taken on apprenticeships or hopefully enter the workplace.

The only grade where Northern Ireland is not performing better than England and Wales is A*.

Northern Ireland outperformed the rest of the UK at grades A* to A by 3.4 per cent.

While the percentage of A and A* grades in Northern Ireland in the full A-level exams was slightly down from 29.9 in 2014 to 29.3 this year, the overall pass rate is up by 0.1 percentage points, with 98.2 per cent of students achieving A* to E grades.

Girls in the North outperformed boys, in terms of A* grades, by 0.4 percent, but the gap is closing as each year passes.

Mathematics was the most popular subject, accounting for one in 10 entries. This was followed by Biology, Religious Studies, History and English. A-level entries rose by 2.5 percent from 31,600 in 2014 to 32,390 this year.

Justin Edwards, Chief Executive of Northern Ireland’s awarding organisation, the Council for the Curriculum, Examinations and Assessment (CCEA) said he was pleased to see growth in students choosing to study Maths at A-level.

“Mathematics provides access to a wide range of educational pathways and careers,” he said. “While entries in this subject have grown across all three countries, in Northern Ireland that growth has been notably strong. It’s also encouraging to see that more female students are choosing A levels in Science, Technology, Engineering and Maths (STEM).”

Stormont education minister, Sinn Féin’s John O’Dowd, said a variety of options were available to young people perhaps disheartened by their results and spoke of his pleasure at the popularity of STEM subjects with young people in the North.

“This year we have seen an increase in A level entries which is encouraging and I am delighted that Maths has topped the poll as the most popular subject with A level students,” he said.

“Employers continue to tell us about the growing need for students with Science, Technology, Engineering and Maths subjects and this year entries in these subjects from female students have increased considerably.

“Seeing the relevance of course choices for the future is vital in keeping young people engaged and motivated to achieve and the Entitlement Framework has opened up the choices available to pupils sitting A levels. Our young people have performed well and I wish them well in their next step.”

“This milestone often presents a crossroads in a young person’s career development and I would encourage students unsure of their next step to take advantage of professional careers guidance from my Department’s Careers Service, ” he said.

“Careers advisers can provide guidance on a range of options and career related issues, including further and higher education, apprenticeships, training, employment and voluntary work opportunities.”

Dr Farry also said a wealth of information was available to young people and their parents on the Careers Service website or information could be accessed by calling 0300 2008720.

Earlier in the summer Queen’s University Belfast and Ulster University indicated a reduction in student places as a result of Stormont budget cuts.