More than 170 errors in State exams in past five years 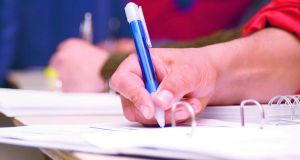 Not written in stone: many minor errors crop up in exam papers, for which the State Examinations Commission produces a ‘List of Corrections’

More than 170 errors were made on Leaving and Junior Certificate exam papers during the last five years, according to figures released by the State Examinations Commission (SEC).

Since 2009 a total of 171 errors have been discovered after examination papers had been printed and before examinations started. The errors were brought to the attention of examination superintendents who notified candidates before the exams commenced.

Last week a number of errors were detected in Leaving and Junior Certificate exam papers, which prompted Minister for Education Ruairí Quinn to order a report into how the mistakes may have occurred.

Bernie Judge, education research officer with the Teachers’ Union of Ireland (TUI), said that while the vast majority of mistakes were minor errors, it was essential to have a robust system for error detection.

A higher-level Leaving Certificate maths paper two included the incorrect value for an angle in a trigonometry question, confusing students who used a second method to verify their work. There were also errors on three other mathematics papers at Leaving and Junior Certificate level. A typographical error was detected on the ordinary-level Junior Certificate science paper.

The SEC said it had a formal process in place for scrutinising examination papers after they had been printed, and produced a “List of corrections”– the internationally tried and tested mechanism for bringing errors that emerge after papers have been printed to the attention of exam superintendents.