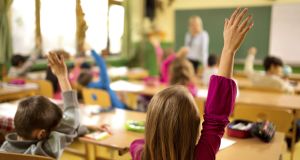 Draft proposals which could lead to a reduction in the amount of time primary schools spend teaching religion have sparked a mixed reaction from campaign groups.

Most primary schools typically spend up to 2½ hours teaching religion – or faith formation – each week.

The Irish Times reported on Tuesday that the State’s advisory body on the curriculum is drawing up proposals which could lead to more of the school day being dedicated to core subjects such as English, maths and Irish.

The National Council on Curriculum and Assessment has declined to comment, except to say it will publish proposals on time allocations for the primary school day in the autumn.

Equate, a campaign group which promotes equality in the education system, said children were currently spending almost as much time studying religion as they do on maths.

The group - citing Irish National Teachers’ Organisation figures - said religious instruction accounts for about 91 hours of the primary school year, compared to 37 hours for physical education and 110 hours for maths.

It said schools have no national guidelines on how to structure the learning environment for children who opt out of religious study in primary school.

Michael Barron, director of Equate said: “If you are someone of a minority religion or of no religion you really are going to struggle to find a State school that that does not assign 10 per cent of the school year to its own faith formation.

“Given the diversity of Irish families and communities today, it is now time that we examined how appropriate this level of faith formation is in 21st century Irish state funded schools.”

However, the Iona Institute said the draft proposals were a response to the overcrowding of the primary school curriculum and could undermine the place of denominational education in Irish society.

“For parents who support denominational education, religious education is a good thing in itself,” said Dr Tom Finegan of the Iona Institute.

“It is at least as important that children leave school with well-formed moral characters and a fulfilling relationship with God, as that they leave with a good knowledge of Irish, or art or music or maths.”

He said the thinking behind the proposal appeared to be that the time spent teaching religious education was somehow compromising academic standards in our schools.

“What is the evidence for this? Catholic primary schools in Northern Ireland also allocate around 2½ hours per week to religious education and those schools regularly outperform their State counterparts,” Dr Finegan said.

“Furthermore, Northern Ireland primary schools regularly appear near the top of international league tables along with Finland. Scottish Catholic schools also allocate 2½ hours per week to religious education and those schools also fare well academically despite the fact that they are often located in more disadvantaged areas.”

He said the NCCA should leave it up to schools and their patron bodies to decide whether or not to allocate 2½ hours per week to religious education.

“Otherwise it will be unjustly interfering with parental rights and the rights of all those involved in supporting denominational schools,” he said.

Sources say the NCCA draft proposals may allow schools to decide on how much time they wish to dedicate to their patrons’ programmes. This time, however, is likely to be outside set time allocations for the State-backed curriculum.