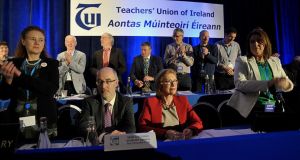 Minister for Education Jan O’Sullivan says she hopes teachers “will come in numbers” to training sessions next week for the new junior cycle programme despite an instruction from their unions not to attend.

Speaking to reporters at the Teachers’ Union of Ireland conference in Wexford, the Minister said: “It’s somehow or another disturbing to me that a teaching union like the TUI would seek to prevent its members from learning, from getting more knowledge, from expanding their own professional development. I think they shouldn’t block their members from upskilling.”

She was speaking after the TUI and ASTI issued a joint statement urging their members to “hold firm” on their industrial action, which escalates next week with the picketing of teacher-training centres.

Asked about the legality of the pickets, Ms O’Sullivan said she understood there was an issue about picketing premises that were not directly involved in a dispute but she had not given it consideration as her priority was on achieving agreement.

English is the first subject to come under the new junior cycle programme, and its teachers have been allocated up to 16 hours continuing professional development (CPD) as the reforms are rolled out.

The Minister appealed to TUI members directly to attend CPD for the junior cycle, a plea that was met with silence. Her address overall was warmly received and punctuated by several rounds of applause.

In particular, “she has met us on more occasions than a succession of previous ministers put together”.

In his response to her speech TUI president Gerry Quinn said the Minister had “made a fairly good attempt” to get junior cycle reform out of the mire into which it had been driven by her predecessor, Ruairí Quinn.

“You’ve got it into reverse gear but it’s still stuck . . .We’ll give you a hand,” Mr Quinn said to loud cheers.

The TUI president took a swipe at management bodies which were like the “nodding dog” in the back window. “No matter how many changes are made they just keep nodding.”

And invoking educationalist Paulo Freire to challenge the ideology underlying the reforms, he urged the Minister to stand back and “think of what the founders of the Labour Party would have thought of you trying to proceed hand in glove with management bodies to implement, in the words of Freire, ‘a cultural invasion’, against the will of the workers”.

Earlier the TUI passed a number of motions reiterating its opposition to school-based assessment, particularly the plan to assess English students from next year on an oral presentation.

Executive committee member Seamus Lahart claimed an average-sized school of 500 students would produce about 1,000 assessment-led projects in each of second and third year. “Those of us living in the real world and away from the plush offices of Marlborough Street can foresee the absolute chaos and mayhem that will inevitably be the result of such a plan.”

The reforms would also deepen inequalities between schools “filled with children with widely varying needs and abilities” and those catering for “children coming from perfect homes with supportive parents, broadband, libraries, folders and a wide variety of coloured pens and markers”.