‘Managed decline’ at institutes of technology 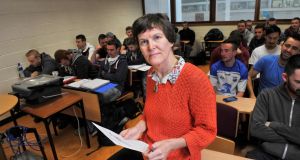 It’s the little things, says Susan Flannery. There’s the broken overhead projector. Or the photocopier which rarely seems to have paper. Or the sluggish computers which should have up-to-date software.

“This is where we’re at now. It’s a condition I’ve heard well described as ‘managed decline’,” says Flannery, a lecturer at the Cork Institute of Technology’s (CIT) business school.

“The sector is coping and continues to deliver to national objectives. But it’s doing so with less and less resource per student due to the combined effect of reduced funding and growing demand.”

Flannery says lecturers go the extra mile to support students, but are regularly hamstrung by a deteriorating infrastructure. Inevitably, it can end up impacting on the quality of tuition.

There are modules in business courses which require computers and one-to-one support, for example. Yet there are times when there are not enough computers for each student.

“When out-of-date or broken equipment is not being replaced, there is less and less room for innovative approaches to pedagogy,” she says.

“Work experience and internships become nice to-dos instead of being core to the quality of graduates . . . in effect, everything is gradually being pared back to a bare minimum.”

CIT, like many other institutes of technology across the State, is under acute pressure. State funding tumbled by a third between 2008 and 2015, while student numbers have grown by almost a quarter over the same period.

A review by the Higher Education Authority – seen by The Irish Times – has found that five institutes of technology, including CIT, face immediate “sustainability challenges”.

There are also concerns over another four institutes due to current or projected deficits or limited financial reserves.

The total income per student across all institutes of technology has fallen by 25.5 per cent between 2008 and 2015 due to tumbling State grants and increasing student numbers.

This is almost twice the scale of decline faced by universities and colleges, who have the scope to borrow money and greater capacity to generate private income .

Institutes of technology, however, are legally prohibited from borrowing and are much more dependant on the State for funding.

If anything, these problems are set to grow. At an aggregate level, the sector is in deficit and this trend is projected to continue over the next five years.

The review also funds that campus environment across most institutes has been “adversely impacted” as there has been no funds available for capital investment.

The report finds that “radical action” is needed if the sector is to grow over the coming years.

However, in the absence of funding, the report suggest that institutes may have to place restrictions on student numbers for the first time to ensure a “minimum quality of provision is maintained”.

The Institute of Technology sector has its roots in a 1962 report, Investment in Education.

The idea was to create a network of colleges which could provide high quality training and education that was closer to industry.

When the Regional Technical Colleges – as they were known – opened their doors in the 1970s, just 30,000 students were at third-level. Today, that number has ballooned to about 215,000, a seven-fold increase. In fact, Ireland now has the highest proportion of young people in the EU attending third level.

Tom Collins, the chair of the Technological Higher Education Association, says institutes of technology have played a crucial role in boosting the numbers progressing to higher education.

“They are central to proving a transformative and robust support to local and regional economic development through incubation centre, close-to-market research tradition and the supply of a steady stream of employment-ready graduates throughout the country.”

The number of school-leavers attending third-level is set to grow even higher over the coming years due mainly to demographic factors.

Collins, however, says the financial challenges faced by many institutes will limit their ability to meet expected growth in student demand.

The consequences are profound, he says, for many regional areas where these colleges have helped boost the local economy and raise expectations for school leavers.

The satellite campuses of some institutes of technology established in more rural areas over the past decade or two have also opened the door to higher education for many who might never have contemplated it as an option.

However, for example, Letterkenny Institute of Technology’s campus in Killybegs is in serious deficits (€1.3 million).

Galway-Mayo Institute of Technology’s campuses in Castlebar and Letterfrack are also in the red to the tune of €2 million and €700,000 respectively.

Similarly, Cork Institute of Technology’s National Maritime College in Ringaskiddy is facing a deficit of about €1 million.

The report states that the Higher Education Authority should consider whether these campuses are viable or whether increased funding should be made available to keep them running.

Despite financial constraints, institutes like CIT have managed to expand their numbers and their course offerings. Yet, they say, this is becoming unsustainable.

CIT is running a deficit of about €2 million, according to latest available figures.

While the number of academic staff has fallen by 11 per cent, this has been largely off-set by additional working hours for lecturers agreed under a public sector pay deal.

It means, however, there is much less time available for one-on-one support, or “non-teaching student contact”.

A spokeswoman for CIT said it has cut its budget for the maintenance of equipment and buildings to“unsustainable levels”; this, it says, is impacting on the fabric of its campuses.

“The lack of a borrowing framework is already a major issue and is preventing us responding to demographic increases now and over the next 10 years, wherein we estimate student demand to increase by between 25 per cent and 30 per cent,” the spokeswoman said.

The institute says it has suffered disproportionately on the basis of its provision of so-called stem courses in science, technology engineering and maths, an issues facing many other IoTs.

These courses are expensive to deliver – almost twice the cost of a business course, for example – due to the reliance on lab work and specialist equipment.

These additional expenses were recognised under State funding, which gave an added weighting for stem courses, about 1.7 times the cost of a regular course.

However, a sharp decrease in State funding has been offset with hikes in the student contribution fee over recent years. This funding, however, is not weighted in favour of stem courses.

“This had an impact on CIT for the previous year of €1.8 million roughly the same size as our deficit. This stem disincentive is very serious and we do have assurances from HEA that they will address it.”

While the HEA’s report makes for troubling reading, there are also some hopeful signs.

Even in the face of financial challenges, some institutes have successful with the right approach and circumstances. There is financial reward for the most innovative institutes in pursuing part-time and online provision.

Institutes like Blanchardstown and Sligo are making major strides in these areas and are not in the precarious positions shared by many others.

Notwithstanding this, there is no escaping the fact that substantial capital investment is required immediately to meet additional capacity across the sector, while greater flexibility on recruitment and deployment of staff is regarded as essential to respond to increased numbers.

“Evolving the mode of learning delivery may offer a further means of responding to future demand but, aside from one institute and a few developmental blended-learning projects elsewhere, there is little evidence of the sector taking up the mantle as a field leader in expanding electronic provision,” the report notes.

Without a major shift in capital infrastructure development, flexibility over deployment of staff, streamlined delivery costs or additional recurrent funding, there may be no choice but to place restrictions on student intake to ensure a minimum quality of provision is maintained.