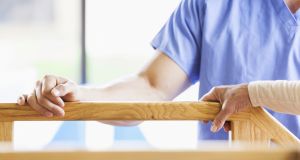 High points are required to study occupational therapy, a rewarding and challenging career

Vera McGrath is an Occupational Therapist. She repeated the Leaving Certificate in 2008 at St Aloysius College, Carrigtwohill, Co Cork.

I am the youngest of five and my siblings followed diverse university paths from Commerce to Art History to Nutritional Sciences.

As a child, everything interested me. I even at one point went through an ‘I want to be a priest’ phase and said Mass in the living room at home.

I always had a general interest in human anatomy and sport. It wasn’t until I attended a careers fair in transition year that I became focused on the varying roles of allied health professionals.

From there, I researched careers such as Occupational Therapy and Physiotherapy and used transition year work experience to gain insight into these roles.

I had a natural flare for science and studied biology, chemistry and physics for the Leaving Cert. Allied health course places are highly competitive and I was aware of the points requirements.

At the top of my form there were the health sciences, all over 500 points, and finally around sixth down the list was general science, a respectable 300 points entry.

In hindsight, the pressure to gain such high points was overwhelming, and I spent more time worrying about failing in the points race than studying. It was self-destructive, and I lost a considerable amount of weight from stress.

When the results came out in August 2006, I put on my best Oscar performance and grinned widely when I met well-wishers. Inside I was crippled with disappointment. Unless the points dropped dramatically, I knew I had no chance of being offered a place in Occupational Therapy anywhere in Ireland, and a week later it was confirmed.

I eventually accepted a place in Biological and Chemical Sciences and followed the flock to UCC and refused to admit the truth to myself. With that came the reality of how unhappy I was with the decisions I had made since finishing school.

I completed first year regardless and before second year commenced I told my parents I would not be returning. The lab life was not for me and I finally admitted I had made the wrong decision. In hindsight it was a mature decision for a 19-year-old.

My parents were initially shocked that I was considering repeating the Leaving Cert now that I was a full year out of school.

I researched grind school options but they didn’t seem appropriate for me. UCC granted me a one-year leave from the course, and I enrolled in the repeat Leaving Cert course in Cork College of Commerce in 2007.

It had the structure of school without the shameful identification of a maroon coloured uniform. I think even that simple freedom empowered students.

I had seen everything already, and the teachers were very exam focused. I took up Agricultural Science and choose not to repeat English due to the change in syllabus.

When the results came out I remember I travelled to the college alone. I was handed my envelope and held it for an hour before I looked inside.

I cherished the moment where anything was possible. When I eventually took out the crisp harp stamped sheet, all I could see was A1, A1, A2 grades.

It was the closest to euphoria I had experienced and I got the points I needed for Occupational Therapy.

A week later I was offered a place in the BSc in Occupational Therapy in National University of Ireland Galway.

The course was intense and would very quickly weed you out if you did not have genuine interest in pursuing a career in Occupational Therapy.

The diversity of clinical areas appealed greatly to me and with the support of our school head, Prof Agnes Sheil, I graduated in 2012 with an honours degree. Due to the economic climate and employment embargo in the HSE, it was difficult to obtain work initially and I have had to even work for free to gain vital experience to even get an interview with prospective employers.

I have since worked in acute hospitals in Kilkenny and the Bon Secours Hospital in Cork. I am currently working in Cappagh National Orthopaedic Hospital in Dublin as an active rehabilitation OT and have been there since last year.

I work with patients with neurological, orthopaedic and physical and cognitive disabilities as part of a multi-disciplinary team. The aim is for the patients to gain independence in their daily life, with the end goal of returning home.

Not excelling in your Leaving Cert is not the end of the world as there are many routes nowadays for you to get where you want to be be, career-wise.

I still use my experience of repeating the Leaving Cert as an example of determination and maturity at a young age to follow the path I truly wanted. I am grateful now, as an OT, to my younger self for taking that leap of faith.