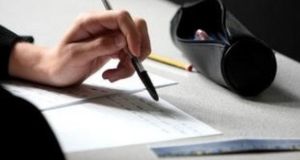 Students whose strengths lie in trigonometry and geometry would have found today’s paper well suited to them. File photograph: Getty Images

Leaving Cert maths students today faced some of the most challenging questions in recent years, according to teachers.

While many students are likely to be reasonably happy with the overall paper, Aidan Roantree, a maths teacher at The Institute of Education, said the higher level paper two had some daunting questions.

A question on co-ordinate geometry was very challenging, while another referenced a concept which many students would not be aware of.

“By and large there was enough for students to obtain a pass mark,” he said,

“ However, more so than on paper one, there were also question parts that would have allowed the very best students to show their abilities.”

As with last year, Mr Roantree said the second maths paper was harder than the first.

On this occasion, however, the difficulty lay mainly in Section A, rather than the traditionally more daunting Section B.

He said it was interesting to note the change in the number of questions and the amount of marks .

More marks went for trigonometry (125) than for probability and statistics combined (100).

Luke Saunders, maths teacher and founder of www.studyclix.ie, agreed that this year’s higher paper was a “bit topsy-turvy” with some very challenging questions and a few surprises.

“Most students were surprised and even shocked to see 15 per cent of this paper given over to functions and calculus,” he said,

“This topic is always examined on paper one. The State Examinations Commission does not guarantee which topics will come up on which paper, and they have certainly shown that today.”

He said students whose strengths lie in trigonometry and geometry would have found today’s paper well suited to them.

Many students will have been disappointed to see no statistical graphs to analyse on the paper, normally a banker question, he said.

One criticism was that many students will have found the diagrams used in question seven very confusing.

“The question was based on a glass roof lantern in the shape of a pyramid, something that was very difficult to visualise from the accompanying line diagrams,” he said.

“I feel a photograph of the lantern would have made this question a lot more approachable.”

Eamonn Toland, founder of themathstutor.ie, said the exam was a paper in the spirit of Project Maths, with challenging questions that involved elements from several different parts of the course.

“Overall, this paper was more difficult than paper one and definitely had more surprises for the students than last Friday’s paper.”

He said a question on functions and calculus (question eight) would have surprised most students and teachers. Many had expected to see it on the first paper.

“This demonstrates that some topics can appear on either or both papers,” he said.

This section of the course on inferential statistics has created a lot of confusion among teachers and students.

However, the question was very “doable”, he said. Part (c) might have been challenging, as students would have to know something about the central limit theorem.

More than a third of those sitting this year’s exams declared for the more challenging paper, a record high.

The increase in those studying higher level maths follows changes in recent years aimed at increasing the popularity of the paper, including bonus points and a reform syllabus.

At ordinary level, Mr Toland said there were few surprises and most students would have found that paper very accessible .

“Certainly the coordinate geometry questions were quite easy as was the question on geometric constructions,” he said.

The only hiccup was the lack of a question on inferential statistics on this paper.

“There was a lot of confusion among teachers and students about this topic and maybe the State Examinations Commission picked up on this and played it safe,” he said.

Jean Kelly, a maths teacher at The Institute of Education, said overall it was a very manageable exam.

“Weaker students will be relieved and would have found the paper very accessible,” she said.

“Questions were nicely designed and students were led through them in a structured way. The language used was clear and uncomplicated. There was nothing unexpected.”