School leavers will benefit from grade inflation, but deferred college applicants may lose 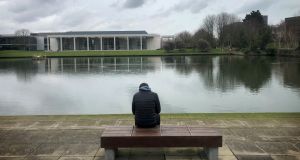 The almost deserted UCD campus in Belfield in March after it was shut due to coronavirus. Photograph: Bryan O’Brien

It’s a been a Leaving Cert like never before. No summer exams, the first ever set of teachers’ predicted marks and a record high set of grades across the board. The devil is in the detail, however. A closer reading of the results shows there are winners and losers from this year’s calculated grades process:

Huge grades boost for the class of 2020
There has been a surge in the proportion of top grades achieved by students, especially at higher level.

While the official figure for grade inflation across all subjects and levels is 4.4 per cent, it masks the extent of the rise in grades at the top end.

For example, the proportion of students securing H1s has jumped dramatically in many cases.

There were also big jumps in the proportion who securing top H1 grades this yeear versus last in applied maths (up 79 per cent), geography (up 54 per cent), Irish (up 49 per cent), English (up 43 per cent) and maths (up 31 per cent) to name a few.

Teachers
Teachers overestimated their students’ marks at all points in the achievement spectrum. It was most pronounced at the upper level, where top estimated grades were sometimes two, three or even four times higher than normal patterns.

For example, last year a total of almost 6 per cent of students – on average – secured the top grade of H1 in each subject. This year, under teachers’ estimates, this ballooned to more than 13 per cent.

These marks were adjusted downwards by a standardisation process, which aimed to bring marks closer into line with previous years.

Teachers and schools will be happy that most of their estimates remained intact.

Minister for Education
The car crash that was the calculated grades process in the UK proved useful for Ireland.

The Department of Education here had a crucial number of extra weeks to learn from British mistakes and make adjustments accordingly.

Policy makers faced a decision: prioritise this year’s cohort of Leaving Certs with relatively generous grades, or focus on ensuring grades were strictly in line with previous years. They opted for the former.

Minister for Education Norma Foley will most likely escape the kind of controversy that marked the UK experience.

Deferred applicants
Up to 20,000 college applicants who applied for courses this year on the basis of Leaving Cert results achieved in previous years now risk being disadvantaged in the CAO points race.

Grade inflation for the class of 2020 looks set to devalue the achievements of many of these students who achieved their results in 2019, 2018 and so on.

Department of Education officials have said adjustments to the calculated grades process were aimed at “prioritising fairness for the class of 2020 over eliminating grade inflation”.

Try telling that to students who will lose out, though.

In about half of these cases – 935 – students were unable to get a calculated grade. This was because they were studying the subject outside school and either didn’t have a tutor or body of work to show their achievements.

Many of these students had been banking on securing a high grade and will lose valuable points as a result. The system has responded, to a point, by ensuring any student who had been relying on this subject to satisfy language entry criteria to a NUI college will get an exemption.