Junior Cert geography and maths 1: Rocks and a hard place 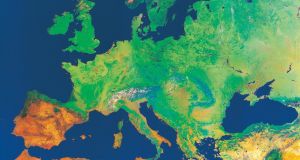 There was no sign of Bono on the Junior Cert geography higher-level paper - the only major rock groups were igneous and sedimentary. Nevertheless, it was a pacy paper, according to Neil Curran of ASTI.

“The paper was very up-to-date, with topics ranging from tourism trends in 2013 to traffic congestion. The higher paper was a fair examination of the course overall.”

There were also questions on home energy usage and global life expectancy rates, and an examination of the push and pull factors involved in global migration patterns.

“The questions were wide ranging with a great range of topics,” said the TUI’s Maria Kennedy. “One of my students who came out with a beaming smile felt ‘It was the best exam so far this week’.”

Geography is a core subject for the Junior Cert. Roughly half of all students go on to take it as a Leaving Cert elective.

Around one in six students took geography at ordinary level. The exam made inventive use of imagery, which appealed to students, according to Neil Curran.

Marie Kennedy, however, described it as more challenging than usual.

Under the new junior cycle plan, geography is likely to become an elective subject.

“We’ll have to see what the Minister is thinking, but it’s a very popular subject so I think it will survive,” said Mr Curran, who teaches geography and history.

“I worry for history - if schools have a choice I fear history will be let go.”

The afternoon maths higher level paper was wide ranging and well-differentiated, according to commentators.

The ordinary level paper, taken by around one in three students, was described as fair overall, with the exception of a complex number question (Question 6) that featured a number of challenging components.

The table below shows a push factor, a pull factor and a barrier to human migration.

Complete each of the following sentences using the correct term from the table above.