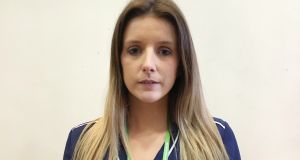 Teacher Siobhán Peters: She estimates she is paid about €6,000 less than her colleagues and many newly qualified teachers are even worse off. Photograph: Carl O’Brien

Siobhán Peters works alongside teachers who do the same job, the same hours and have the same qualifications. But, because she graduated after 2011, she is paid thousands of euro less than her colleagues.

“There is a real fairness issue here,” says Peters, a maths teacher at Loreto secondary school in Clonmel, Co Tipperary. “It’s hard to be in the staffroom when you see others doing the same job who are getting paid more. The only difference is I joined the profession at the wrong time.”

She estimates she is paid about €6,000 less than her colleagues. But in some ways she is lucky. Many newly qualified teachers are worse off because of further pay cuts imposed on graduates who qualified since 2012. Starting salaries are about €31,000, but many with low hours earn as little as €10,000 a year.

Peters, a member of the ASTI, says trade unions need to ensure it is a priority issue if they are to remain relevant to younger members.

“You need strength in numbers,” says Peters. “But the danger is young people won’t join because they don’t see the benefit of it. The morale of teachers is very low, especially among younger teachers.”

Thousands of teachers who entered the profession after 2010 are on different pay scales from their colleagues, even though they have the same duties and responsibilities. The Teachers Union of Ireland estimates that newly recruited teachers will earn about €300,000 less over a 40-year career compared to their longer-serving colleagues.

The roots of the differential pay scales go back to the economic crisis. In the 2011 budget, new teachers’ pay was cut 10 per cent, while they were placed on inferior pay scales.

The following year, most pay allowances for extra qualifications such as master’s degrees were abolished for those entering teaching.

Many younger teachers feel bitter that the issue has not been dealt with seriously enough by their unions.

The ASTI however, says it has made progress in having cuts restored.

At yesterday’s conference, it voted overwhelmingly in favour of a ballot on industrial action up to and including strike action unless the issue is addressed by the end of August.

There are fears that young teaching graduates are leaving the profession in favour of better-paid and more secure jobs. Gerry Quinn of the TUI says many are experiencing income poverty and are often struggling or failing to pay their rent.

“They can earn considerably more in industry, start work two years earlier and enjoy full hours, better job security and promotional prospects from the start of their career,” he says.