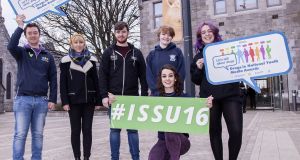 Students’ unions are encouraging young people to get involved in the Drugs.ie National Youth Media Awards, which has partnered with The Irish Times for the first time this year.

Organised by the Ana Liffey Drug Project in Dublin, the competition aims to create a greater understanding among young people about the issues surrounding drug use in all its forms.

The awards have four strands: writing; video/animation; audio; and poster design, with winners chosen across various age groups in each of these categories.

The competition is open to all entrants aged between 12 and 25, and the Union of Students in Ireland (USI) and the Irish Second-Level Students’ Union (ISSU) have asked those attending second and third level institutions around the country to consider submitting an entry.

ISSU president Jane Hayes Nally added that her organisation would like to hear what students have to say “and encourage a dialogue on the students’ experiences and perceptions of drugs and alcohol”.

Now in its third year, the National Youth Media Awards attracted almost 1,000 entries in 2016, with Kells Youthreach scooping the overall prize for their Monkey on Your Back video about drug abuse.

The deadline for entries across all categories is February 1st, 2017, and winners will receive an iPad Mini with one overall prize-winner also receiving a cheque for €2,000.

As part of The Irish Times’ involvement for the 2017 awards, winning entries will also be considered for publication on the Irish Times Student Hub site.

“It is important that students across all age ranges engage in drug education so they can make informed decisions about drug and alcohol use,” said Ana Liffey Drug Project director Tony Duffin.