‘In terms of world profile, UCD is punching below its weight’

Six months into the top job at the university, Australian Andrew Deeks is thinking long-term funding, staff morale, the pursuit of excellence and a shot at the Top 100 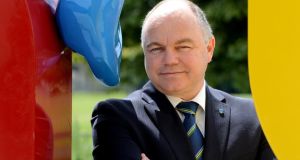 Andrew Deeks, the recently-installed president of University College Dublin, is far too polite to rain on Ruairí Quinn’s valedictory parade. But the departing Minister for Education has left behind a funding model for higher education that “is not sustainable” and is being propped up by a registration charge now hitting €3,000. As Deeks puts it mildly, this is “higher than what one would expect an administration charge to be”.

“From my observation, coming from Australia and the UK, Ireland has the worst of both worlds in the sense that we get the smallest amount of money per student compared to Australia the UK. But the student has to pay the biggest amount up-front. I’d see this as a barrier to higher education.”

Deeks is a novel addition to the Irish third-level landscape. Proudly Australian – though he was born in the UK and holds a British passport – he grew up in Perth and studied engineering at his local university. He stayed on to complete a PhD, gained a professorship and then “I got a tap on the shoulder to become the next head of school”.

Reluctantly, he abandoned his specialist field of computational mechanics, specifically “the scaled boundary finite element method”, and became an administrator. “I found I enjoyed that and was reasonably successful, and people appreciated the work I did in the role.”

In 2009, after a decade on the staff of the University of Western Australia, Deeks joined Durham University as vice pro-chancellor where he is credited with helping to lift the 250-year-old institution to 80th place in the Times Higher Education rankings. This weighed heavily on the mind of UCD’s interview panel when it offered him the job, although Deeks says he hasn’t a “specific target” to get the Dublin college into the Top 100.

“What we are aiming to do is pursue excellence in education and research, and being Ireland’s global university – engaging locally throughout Ireland and in the world – and delivering to students a holistic experience which prepares them to take their place in society. In doing that, I would see us moving up into the Top 100. So it would be a consequence, rather than a goal in itself.”

On the day Quinn announced his departure, Deeks was marking precisely his sixth month in Belfield. In that time, he has won over some internal sceptics and calmed fears that UCD’s first external head since Cardinal John Henry Newman will sell the university’s values down the river.

“I don’t think the core role of the university is being chipped away but perhaps there has been an expansion of the role of universities. . . Yes, there are a certain number of academics who think of the good old days, and that’s the case around the world. So in a number of discussions, what I’ve been indicating is that times have changed, and there is no choice but to move with the times. Personally I see it as a positive that universities now engage much more globally, engage with the local community, engage with industry, with governments, and partners internationally. I think that enriches the student experience.”

Describing his first visit to UCD as a “pleasant surprise”, he says: “There are a few world-class universities that can boast the breath of subject mix that we have here, from a full engineering college to law, through business, through the veterinary sciences, social sciences, arts and humanities and a full medical school with attached hospitals. There are very few universities in the world that can boast the full house.”

However, he adds: “In terms of world profile, UCD is punching below its weight and there’s a lot of opportunity in that area.”

His predecessor Hugh Brady, whose modernising agenda carried a “pro-business” slant, had a fractious relationship with academic staff, and one of Deeks’s priorities has been rebuilding bridges. “In my experience, leading academics is very much a partnership process,” he says. “Working with a very bright and independent group of people can be very stimulating. When one takes on board the talent that one has around, then one can make progress quite significantly in many areas.”

Last month, he bussed the heads of schools and other key staff to Kilkenny for an overnight trip so they could brainstorm on UCD’s strategic plan, due for publication in the autumn. The off-campus get-together was something he trialled successfully at his two previous universities but before you can say “junket” he explains it was “two days of intensive meetings. I was in Kilkenny but I didn’t actually get to see Kilkenny.”

Deeks has also earned some goodwill from students by being a frequent attendee at campus events. Something of a workaholic, the Australian, who played rugby and cricket at school, admits he has little social life outside of Belfield. His wife Linda, who he met at Durham, is a researcher in intercultural studies, and on a rare, recent day off, he got to show her parents a bit of Dublin.

The president’s office overlooks UCD’s central, artificial lake where the din of drills can be heard from the nearby O’Brien Centre for Science, phase two of which has just been completed. Another building project on campus is the construction of a new Confucius Institute. Last month, Lui Yunshan, the Chinese Communist Party’s “number five”, was in town to turn the sod.

There are 450 such institutes internationally but it is the first time the Chinese government is funding a dedicated building anywhere in the world, says Deeks.

“It’s very significant in raising our profile within China”.

The institutes have attracted critics, especially in the US and Canada, where they are accused of dodging human rights issues, and of allowing an arm of the Chinese government a role in higher education.

Downplaying these concerns, Deeks says: “With the Americans – I wouldn’t want to hark back to McCarthy – but there is an element there that’s deeply suspicious of the Chinese and the Communist system. My personal experience of the Confucius Institutes is that they are very much just teaching Chinese language and traditional Chinese culture which doesn’t have any political overtones at all. The control over our Confucius Institute here is by a board which I, in fact, chair. We have a majority on the board so I don’t have any reservations about that all.

“I know there is some criticism about the courses using prescribed textbooks. The balance of that is the textbooks are delivered free by Hanban [the Beijing-based headquarters of the Confucius Institutes]. I have learned Chinese from those textbooks and I know they are harmless.”

The focus on China ties into to a wider UCD plan to stand out from the competition. “In terms of differentiation nationally, UCD would already see itself very much as Ireland’s global university. It has been engaged globally longer and more deeply than any other Irish university, as far as I been able to see, and we certainly intend to continue that.” This means more partnerships with overseas universities “but also links with multinational companies here, and with the government departments here”.

Overshadowing these plans, and the sector as a whole, is a major financial crisis. One of Quinn’s last acts in office was to create an expert group to recommend funding options for the sector by the end of 2015. Deeks breaks down the problem into three questions: “The first is the quantum of funding, how much per student?”

He says this needs to be raised to the “equivalent of competitors internationally”.

“The second question is how the cost of that is distributed between the individual who benefits from education and society which also benefits.” In Australia, of which he speaks approvingly, roughly 40 per cent of the cost falls on the individual, and 60 per cent on the state.

“The third question is how the individual student pays for their contribution. In Australia and the UK they allow the student to enter university without any upfront cost, and then the student contribution is paid retrospectively. I certainly think we should be looking at such a system, the details would have to be worked out taking into account the Irish context.”

His preference would be for a loan system, whereby the debt is accumulated module-by-module, rather than a graduate tax which is paid on exiting college. For high-cost courses like medicine, the debt would be higher but “the person graduating from medicine would have a greater capacity to payback that higher amount”.

A more immediate problem is tackling staff-student ratios which have risen across Irish higher-education institutions from 1:15 in 2007 to 1:19 today.

“The first thing that needs to be done is the constraints on recruiting staff need to be taken off us.” But the Department of Education is reluctant to budge on the issue, given that the pension burden of universities falls on the state. It is also conscious of UCD’s track record of overspending on salaries; the college was criticised by spending watchdogs three years ago for €4 million in “unauthorised” payments to senior academics.

Deeks stresses that the clock is ticking and while the college has sufficient funds “to get through to 2016, there will need to be a resolution at that time”. A natural conciliator, however, he says: “We need to make sure the review group is adequately informed.”