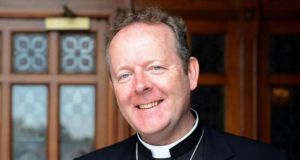 Catholic Primate Archbishop Eamon Martin. It is understood a decision may be made on Hibernia College around the end of June, although the bishops would make no further comment. File photograph: Eric Luke/The Irish Times

Graduates of teacher training college Hibernia face several more weeks of uncertainty over whether they have been approved by the Catholic Church to teach in its schools.

No decision was made by the Irish Episcopal Conference (IEC) at its meeting this week on whether to include Hibernia College on a list of approved colleges on the basis of its religious education programme.

Without such accreditation, graduates may have to get a certificate in religious education from an IEC-accredited teacher training college before being considered for employment in Catholic schools.

Asked about Hibernia’s application, Catholic Primate Archbishop Eamon Martin said there was a process whereby “any provider can apply to be recognised. I understand that process is currently under way with Hibernia and I imagine it’ll reach a conclusion.”

New figures show that the privately-owned Hibernia, which provides courses mainly online, has overtaken the State-funded colleges as the biggest supplier of newly-qualified teachers (NQTs) at primary level.

Morte than 90 per cent of schools at primary level are under Catholic patronage.

Minister for Education and Skills Jan O’Sullivan backed calls for a review of constitutional provisions protecting “positive discrimination” in schools on religious grounds.

The Minster said, with all new schools, the department was now writing into the agreements that they can’t so discriminate “but in relation to existing schools we have a constitutional problem unfortunately”.

She said she would love to see a situation where schools had to take children from within their local area, and could only go outside the area if they still had space available.

Ms O’Sullivan also defended proposals under the Admission to School Bill to limit the places reserved for past-pupils to 10 per cent of new entrants.

A number of Fine Gael TDs have criticised the plan but Taoiseach Enda Kenny refused to be drawn on it on Thursday.

Asked whether he supported the 10 per cent figure, Mr Kenny replied: “The Bill is ready but we have to discuss the regulations.

The Taoiseach was speaking at the official opening of a €50 million campus development at St Patrick’s College, his former alma mater.

Mr Kenny, who was described by college president Daire Keogh as a “quintessential Pat’s lad”, recalled “coming here as a 17-year-old in 1968.

He said he believed the incorporation of St Patrick’s with DCU, Mater Dei and the Church of Ireland College of Education on the site would strengthen its respect for religious, cultural and secular traditions.