Fresh calls for restoration of careers guidance at second level 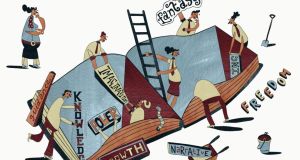 Careers guidance is seen as a priority in curtailing college drop-out rates, according to a study by UCD researchers. Image: Getty

Fresh calls are being made for the restoration of guidance counselling in schools after the publication of research showing that more than half of students dropping out of college did so over a course choice they later regretted.

The Institute of Guidance Counsellors said the study by UCD researchers Niamh Moore-Cherry, Suzanne Quin and Elaine Burroughs highlighted the need for “a more holistic and positive interpretation of noncompletion by all key stakeholders in education”.

Among the recommendations of the report are:

nIncreased career guidance, information and advice to students applying for higher education, with support beginning “well in advance of the decision-making deadlines, perhaps during transition year, focusing on both academic advice and emotional preparedness”;

nIdentification by third-level institutions of students who might be particularly vulnerable to poor social integration, “either because they are the only one attending from a particular second-level school, or whose home is a considerable distance away”;

nMore focus on general learning skills at higher education in the early weeks of first year.

The UCD study, the main findings of which were first published in June, says third-level institutions must play a bigger role in helping students transition to higher education.

The report surveyed 4,036 students who dropped out of courses between 2011 and 2014. It found more than half did so due to their CAO choices; the remainder left for family, health, financial or personal reasons.