In the power vacuum that prevails, uncertainty surrounds what will happen over the coming months to key issues such as school admissions, junior cycle reform and industrial disputes 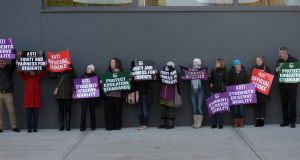 Almost a month after the general election and there is still no sign of a minister for education. But the clock has started ticking on a series of sensitive issues that could escalate into time bombs for a future government if they are not defused sooner rather later.

The teachers’ Easter conferences, for example, allow the minister of the day the opportunity to set out future policy direction for the coming 12 months and beyond.

With issues such as pay, productivity and junior cycle reform hanging in the balance, the conferences would have have provided an important – if rowdy – opportunity to engage with teachers. For the first time in years, no minister will be available.

The fact that internal lobbying over October’s 2017 budget will begin in earnest without a minister at the helm will also be a worry for many in the sector.

In the absence of political leadership on spending priorities, questions about how to fund higher education could be left to limp along for yet another year.

Even more worrying is that, even if a minister is appointed as part of a minority government, the shaky foundations of a new administration could lead to controversial – but vital – decisions being shelved.

Whatever about who will occupy the ministerial hot seat in Marlborough Street, time will not be on their side as they try to grasp a host of urgent issues facing the sector.

Schools may face widespread industrial action from autumn on if a looming dispute over pay and productivity reforms is not tackled soon.

The teachers’ unions agreed to work extra hours and carry out additional supervision and substitution duties under the Croke Park pay deal. The deal that succeeded it, Haddington Road, is due to expire in June as far as teachers are concerned. But the ASTI and TUI have voted to reject its successor, the Lansdowne Road deal. If teachers decide to stop working the extra hours, they will be on a collision course with government.

Under financial emergency legislation, this could result in teachers losing out on increments worth up to €2,000.

It has the potential, as the ASTI’s former general secretary Pat King warned privately last year, to result in a “full-blown dispute” and school closures linked to “strikes or a lock-out”.

Motions urging both the ASTI and TUI to cease working these Croke Park hours will be put before both unions during the Easter conferences. If accepted – which is highly likely – it will up the ante further.

If these issues are not ironed out by the next government or minister over the coming months, expect a very noisy and turbulent autumn.

After eight years of spending cuts and rising student numbers, our universities and third-level colleges are in trouble.

If anything, the problem is set to get worse: high birth rates mean numbers are likely to soar by 30 per cent over the next 12 years. It will require an extra €1 billion just to keep pace with demand. The results, unless changes are made soon, will be overcrowded colleges, bigger lectures and – most acknowledge – a slow deterioration in teaching quality.

Unlike teachers, who have secured funding for the growing school-age population, third level has not received any extra resources to cope with extra numbers. In fact, direct state funding fell yet again last year.

The money required to ensure our third-level system is funded well enough to compete with the best in Europe simply isn’t available, unless the public is willing to pay more tax.

An expert group has completed an unpublished report on funding options to help sustain and grow the sector over the coming years. Although the group, which is chaired by former union leader Peter Cassells, presents a range of options, it leans heavily on an income-contingent loan model for graduates as the only realistic way of generating funds.

Some insiders had expected that a new government would make a swift decision on these recommendation early on in the life of a new administration.

Given the uncertain make-up of a new government, the fear is that these issues will be kicked to touch once again.

It was supposed to herald a new dawn in Irish education, training young people to think creatively and critically. The ASTI, however, is refusing to engage in training in order to protect – as it sees it – standards, equity and quality for all students.

In the meantime, the future of junior- cycle reform is uncertain. Only one in four schools is in a position to carry out the new changes. This means only a minority of schools will carry out the first classroom-based assessments for second-year pupils. Second-year English classes in a minority of schools commenced the classroom-based assessments earlier this month.

There is some wriggle room to get other schools on board, but time is running out. Second-year classes, for example, can defer these assessments until autumn if they wish.

A failure to resolve the outstanding issues soon – which will require the steady hand of a minister for education – could lead to the entire reform process unravelling and setting back long-awaited reforms for years.

What’s in a name? A lot, based on the scramble by institutes of technology to secure the new Technological University status. Ten of the State’s 14 institutes of technology form part of four separate groups that are bidding for the new designation. But only two – Dublin and Munster – have a realistic chance of getting their bids over the line any time soon. They argue these moves are crucial to enhance their reputation, research and futures.

Unions, however, are sceptical about changes they feel have more to do with cost-cutting than academic considerations.

In any event, many colleges have spent considerable sums of money preparing bids.

The necessary legislation to pave the way for the mergers of these institutions was not passed ahead of the election. Given the stalemate over the formation of a new government, and the potential for disputes with unions, it could be a long time before any legislation is back on the agenda.

Parents whose children are stuck on waiting lists for their local secondary schools fear they will be left without places in September.

The problem is most acute in places such as Wexford town, where all five secondary schools are oversubscribed, as well as areas of high population growth such as Newbridge in Co Kildare and suburbs of Dublin and Galway.

Campaigners say a combination of admission rules that prioritise the children of past pupils and a shortage of school places is causing stress and anxiety for parents and children.

However, the Department of Education says multiple applications from parents to schools may be inflating pre-enrolment lists in areas such as Wexford. It says it uses geographical information systems to identify where the pressure for school places will arise and to ensure these needs are met.

“All of our second-level schools in the county are currently under pressure, and demographics point to the situation only worsening in coming years,” he says. “It doesn’t take a genius to work out that these children will require school places, and we need to plan for that now.”