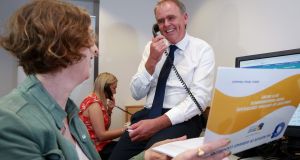 Families who cannot afford to send their children to university should consider more affordable options in regional colleges, Minister for Education Joe McHugh has said.

He was speaking after more than 58,000 students received their Leaving Cert results on Tuesday morning.

College applicants must wait until Thursday afternoon to find out if they have secured a third level place.

Mr McHugh acknowledged that the cost of student accommodation in the country’s cities meant some families could not afford to send their children to university.

“University is a very expensive journey for many families, accommodation is one barrier, one thing I am very attentive to is that no more cost is put on parents and households, yes, we have a funding issue within universities,” he said.

Universities say they are facing a funding crisis following a 43 per cent reduction in State funding per student over the past decade.

Some university presidents have signalled they may end up being forced to limit the number of places for domestic students due to resource shortages.

Mr McHugh acknowledged there were funding challenges at third level, but said overall funding for the sector had climbed significantly since 2015.

“We’ve doubled our capital spend, we’re looking at a human capital initiative of €300 million to be announced next year and our current spending on third level has increased 25 per cent since 2015,” he said.

“The hard choices for the next government will be how much extra money do we put in? At the moment we’re putting in €1.7 billion into the third level sector out of a total budget of €11 billion.”

He said universities might be tempted to fill more of their places with more lucrative international students instead of Irish students, but warned against such as move.

“I don’t think that’s a road they want to go down. We have a responsibility to ensure we provide access for our graduates,” he said.

Mr McHugh said competition for third-level places is set to intensify at a European level, with more Irish students going to college on the Continent.

“We know that more and more are taking up places in countries such as Slovakia, Holland, and France. but there is a responsibility to look after young people in our own country...”

On the issue of high rents for student accommodation, he said the increased cost of on-campus accommodation was made by universities themselves.

He said these cost increases were “disappointing” and the Government had responded by expanding new rent caps to cover student accommodation.

Mr McHugh also urged students who are not happy with their results to consider the wide array of options available.

He said he was very disappointed with his own results many years ago and had hoped to study engineering in Queen’s University, Belfast but fell short of the points requirements.

“I ended up going to Maynooth for an arts degree. In hindsight, it couldn’t have worked out better. My message is to people who feel their expectations weren’t met is that there are so many paths, so many options and so many avenues.”