Eight new schools to be under non-denominational patronage

Educate Together will be the patron of four new secondary schools, Minister says 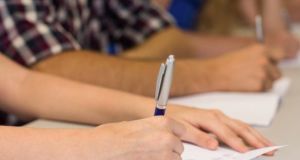 Eight new secondary schools in Dublin, Limerick and Portlaoise will be under the patronage of non-denominational groups. File photograph: Getty Images/iStockphoto

Eight new secondary schools in Dublin, Limerick and Portlaoise will be under the patronage of non-denominational groups Educate Together and the Education and Training Boards.

Additionally, the Edmund Rice Schools Trust – formerly the Christian Brothers and Presentation Brothers – will be the patron of a new secondary school in Castleknock, Co Dublin, Minister for Education Richard Bruton has announced.

The announcement showed that, in all cases, Mr Bruton had accepted the recommendations of the New Schools Establishment Group, an independent advisory body on the patronage of new schools.

“I’m pleased to say that the views of parents as expressed through [that] process are strongly reflected in the decisions I have made on the patronage of these nine new schools,” he said.

Patronage of the new schools for Limerick city and environs (east); Malahide and Portmarnock, Co Dublin; Firhouse, Co Dublin, and Dublin south city centre is being awarded to Educate Together.

Education and Training Boards (ETB) have been awarded patronage of the new schools for Limerick city and environs (southwest) (Limerick and Clare ETB); Swords (Dublin and Dún Laoghaire ETB) and Portlaoise (Laois and Offaly ETB, with An Foras Pátrúnactha as trustee partner).

The Edmund Rice Schools Trust has been appointed patron of the new school to serve Carpenterstown and Castleknock.

The remaining school, in Lucan, Co Dublin, will involve a partnership approach between Dublin and Dún Laoghaire Education and Training Board (DDLETB) and a new entity, Scoil Sinéad Ltd.

Between them, the new schools , which are due to open in 2017 and 2018, will have the capacity for up to 8,200 secondary pupils when fully developed.

“The best and quickest way of providing diversity and choice for parents is by providing multi-denominational schools,” said Mr Bruton.

Educate Together said it was delighted to have been awarded the patronage of four new schools.

“We know that Educate Together gives children freedom to be themselves and parents the peace of mind that comes with knowing that your child is being nurtured in an atmosphere of equality,” said Firhouse Educate Together campaigner Carly Bailey.

“So we’re really looking forward to our children experiencing the continuation of Educate Together’s ethical education at second-level and trust it will be as rewarding as it has been at primary.”

The DDLETB also said it was delighted to have been awarded patronage of two new schools.

“This is a very positive development for Swords and Lucan, which have been designated by the Department of Education and Skills as priority areas for modern new second-level schools,” said the training board’s chief executive, Paddy Lavelle.

“The new community colleges join other recently established DDLETB schools in Kingswood, Kishoge, Lusk, Donabate, Adamstown and Phibblestown, bringing the current total number of community colleges we are patron of in the Greater Dublin Area to 29.”