Doodle Den is tackling inequality after school in Limerick

Impact Journalism Day: Addressing education and inequality one afternoon at a time 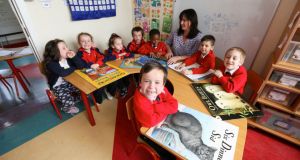 Conor Neill (6) with his class in the Doodle Den in St Michael’s Infants School in Limerick. Photograph: Brian Gavin/Press 22 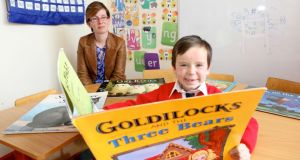 A few weeks ago Siobhán Neill took her six-year-old son, Conor, to McDonald’s as a treat. She was about to ask him what he wanted when he surprised her. “He started reading out the entire menu,” she says. “I couldn’t get over it – to see him there with the confidence to be able to do that. It was wonderful.”

Not so long ago she was consumed with worry about her son. His speech was badly delayed. He didn’t seem able to construct proper sentences. He was falling behind other kids his age. They live in one of the most deprived parts of Limerick city, and she worried if he would ever catch up.

Today much of that anxiety is melting away. She puts it down to the work of an after-school project that is producing impressive results with hundreds of children across the State. Doodle Den, a new literacy initiative, is one of the most ambitious attempts to address education and economic inequality in the country.

By the start of school, children in low-income households may lag about 18 months behind their better-off peers in language development, vocabulary and communication skills. Doodle Den aims to bridge that gap with a big emphasis on learning through fun activities for five- and six-year-olds outside regular school hours.

Each day after classes end at St Michael’s Infant School in Limerick, 15 schoolchildren gather for 90 minutes of intensive, fast-paced reading, writing and playing, led by a primary-school teacher and a youth worker. The peals of laughter mask what is a highly structured curriculum that involves careful documentation and evaluation of each child’s progress.

There were also unexpected outcomes. Children were found to have better concentration and less problematic behaviour at school, and more were reading at home in their spare time.

“It’s offering a real opportunity to give children a good start in life,” says Marian Quinn, chief executive of the Childhood Development Initiative, which first piloted Doodle Den in Tallaght over a number of years. “Literacy is a core life skill without which later chances of full employment and active citizenship are greatly reduced.”

“Even in a normal classroom you can see how the Doodle Den children are thriving,” says Tracie Tobin, principal of St Michael’s Infant School in Limerick, which hosts the after-school activities. “I’m amazed at how well they can write their own sentences and the confidence they have in the classroom.”

It’s a rare good news story against an ominous backdrop for many vulnerable children living in some of the country’s poorest communities.

The economic collapse, along with reductions in social spending, has taken its toll on communities that were already struggling to cope with high levels of unemployment and early school-leaving.

For all the rhetoric about cherishing children and putting them first, Government investment in early years services is poor. State spending on childcare and early-years education is just 0.25 per cent of gross domestic product. This is the third-lowest of 31 countries across the Organisation for Economic Co-operation and Development. Yet research shows that the early years of a child’s life play a crucial role not only in their later development but also in their capacity to earn more and do better in the rest of their life.

Doodle Den and a range of similar projects with a solid foundation of evidence-based results are being rolled out to disadvantaged communities, funded with a mixture of philanthropic and Government money. They are also cheap to run, at about €1,650 a child over an academic year.

A slew of research suggests that investment like this can yield dramatic returns. The National Economic and Social Council, an Irish government-funded think tank, says high-quality early-years projects can produce a return of up to €7 for every €1 invested.

This is because young participants are likelier to earn more later in life and are less likely to rely on welfare or end up in the criminal-justice system.

But campaigners have expressed concern at how sustainable these promising projects are.

A stream of funding from Atlantic Philanthropies and other private sources is due to dry up shortly. Under pressure to rein in public spending, funding for early-years services has been cut over recent years.

The Prevention and Early Intervention Network, which represents many of these early-years projects, says it is concerned that pressure on resources may lead to greater attention being given to crisis-led services instead. “Without a commitment to maintaining and expanding prevention and early intervention, children and families will not receive the supports they need when they need them,” the network said in a statement.

Tusla, the State agency responsible for child and family services, says it is working to embed early-intervention and -prevention work in its work on a long-term basis.

It says dozens of posts are being created to help deliver parenting and family supports across the State; it insists they will continue after philanthropic money has run out.

It is also rolling out a new “meitheal” approach to working in communities, a nod to the old Irish practice of neighbours working together at harvest time. In this case it involves closer co-operation between public services and agencies on the ground.

The practice has proved controversial in some quarters, with individual social workers complaining that it could pave the way for cost-cutting. This is rejected by policymakers who say it’s about making the best use of resources.

Siobhán Neill needs no convincing about the merits of the early-years services her son is availing of. She says that she has seen Doodle Den’s positive impact on Conor and that many others could benefit as well.

“He’s devouring books,” she says. “He loves reading. It’s not homework any more. One of the things they do is ‘tricky words’. They’re supposed to learn them every second evening. But he wants to do them every night. He loves it. It’s something which, I think, will stay with him for life.”

By the time they are just three years old children of affluent professionals have typically heard millions more words than those of less well-educated parents.

Because language is so connected to reading comprehension, the most disadvantaged children face increased challenges once they start school and learn to read. Most experts agree that early intervention, such as high-quality preschool, is crucial to helping to bridge this gap.

Much of this evidence flows from a landmark report based on the High/Scope Perry Preschool project, which started in the US in the 1960s.

The results of 40 years of longitudinal research into the project’s life-long benefits have been startling: participants had higher earnings, were more likely to stay in employment, had higher academic achievement and committed significantly fewer crimes.

But reseachers say that early intervention on its own is no magic bullet.

Early outcomes indicate that the Government-funded free preschool year has failed to narrow the gap in outcomes for children from different social classes.

Experts point out that the quality of intervention is crucial. Targeted measures, along the lines of Doodle Den, may also play a key role in improving outcomes.

Most crucial of all, however, is the role that parents play in supporting learning in the home.