Figures raised questions about strength of teachers’ opposition to reforms 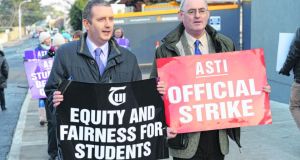 The Department of Education has apologised for giving inaccurate information to The Irish Times on the number of teachers who were paid for the two recent strike days.

However, it said on Tuesday these were described in error as payments when, in fact, they referred to the number of teachers on the payroll on each date.

The number of teachers recorded absent for each of the two days due to strike action were 15,314 and 15,345 respectively.

This means 86 per cent of teachers on the payroll took part in the strike action on each date.

The department figures cover all secondary and community/comprehensive schools, and exclude teachers employed by Education and Training Boards (ETBs).

Based on the inaccurate information, The Irish Times had erroneously reported Tuesday morning that more secondary school teachers were paid for the two recent strike days than had their pay docked for being absent.

As part of their protest against the junior cycle reforms, the unions ordered members to boycott teacher training programmes, and are staging a further lunchtime protest on Thursday, May 7th at all secondary schools. *

* This article was edited on Tuesday April 28th, 2015 to correct inaccurate information provided by the Department of Education