Louise Richardson says State must consider whether it can afford arrangement 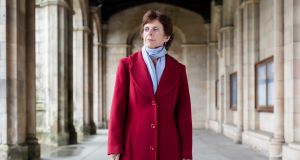 An open debate is needed over whether the State can afford free fees for third-level education, according to the Irish head of one of Scotland’s oldest universities.

Prof Louise Richardson, the Waterford-born principal of St Andrews, takes over as vice-chancellor of Oxford University in January, the first woman to hold the post in the university’s history.

She said higher education was highly expensive to run and free fees in Scotland had become a “middle-class subsidy” for many.

By contrast, poorer students’ participation rates in higher education were higher in England, which had a student loan scheme for all students.

“We think of it as free, but it is not free. It is very expensive. And we need to have a debate on who should bear the cost of it,” she said, prior to an address on the future of higher education at the Royal Irish Academy in Dublin this evening.

“It’s only in 1966 we had free second-level education in Ireland and now 50 per cent attend third level.

“There are trade-offs to be made and we should have a discussion about it,” she said.

More funding was needed in early-years education, she said, if poorer children were to be able to compete with other students for third-level places.

Prof Richardson said a debate could focus on how college costs could be shared publicly and privately, given that both students and wider society benefit from higher education.

An expert group established by the Minister for Education last year is examining funding arrangements for higher education.

It is due to report at the end of this year with a range of approaches that could secure a sustainable funding base for expansion of the sector,

Prof Richardson also said it is vital for universities to “protect and nourish” the principle of free speech, even where it is considered grossly offensive to some.

She said anti-terror laws in the UK aimed at clamping down on extremism were threatening free speech on the college campus.

“In the area of counter-terrorism, there has been an effort to make extremist speech impossible at university.

“I would argue that university is the one last place where we should listen to extremist speeches and openly challenge them,” she said.

“Students shouldn’t feel comfortable – a good education is about hearing views you feel are objectionable, feeling discomfited, and marshalling a reasoned response against them.”

Prof Richardson also praised some of the structures of higher education in Ireland, with its emphasis on universities and institutes of technology.

Scotland has about twice as many universities as Ireland, despite a similar population size.

But, she said, Ireland’s total number of universities was similar to countries with high quality third-level education, and Ireland had proved it was able to compete internationally with some of the world’s best institutions.