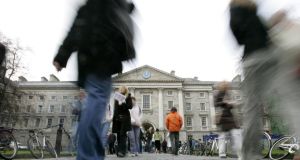 Beneath the ceiling of Trinity College Dublin’s grand dining hall the names have been embossed of some 400 years of benefactors ranging from 16th century monarchs Queen Elizabeth I and James I to modern-day philanthropists Michael Smurfit and Chuck Feeney’s Atlantic Philanthropies .

Alongside the 61 names unveiled today on a frieze at the entrance is a quote from first century BC poet Virgil which translates as ’your name, honour and praise shall always remain’ (Semper honos nomenqve tvvm lavdesqve manebvnt).

The first two places on the ’Benefactors through the Centuries’ list are given to Elizabeth I and Dublin Corporation. A legal instrument (letters patent) from the Tudor queen of England and Ireland founded the university in 1592. A site given by the corporation allowed the institution to make its home in its city centre location.

The Irish Times is among several Irish companies to feature on the list which also includes including Allied Irish Banks, Bank of Ireland, Irish Life as well as some non-Irish companies such as Coca-cola Corporation and Google.

The final three names on the list are the people of Ireland, the Government of Ireland and its agencies and Alumni donors.

“This is our permanent and public testament to the generosity of individuals, foundations, trusts and corporations through the ages,” Trinity chancellor Dr Mary Robinson said as she unveiled the roll of honour .

“If we want to have the best and most successful small country in the world, correct investment in third level education is a big part of the formula to make it happen and if we are to have institutions we can be proud of, we need to step forward,”Dr Martin Naughton chairman of the Glen Dimplex Group said as he spoke on behalf of benefactors.

Provost of Trinity College Dublin, Dr Patrick Prendergast, said generous donors to TCD are “, inspired by their wish to benefit the public good” and have seen their support maximised . “We are honoured that they placed their trust in Trinity” he said.