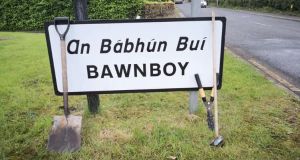 Bawnboy village and the surrounding area has a population of around 250 people. Photograph: Support Bawnboy/Facebook

A community in Co Cavan has started a campaign calling on families to move there in a bid to stop the local primary school from losing a teacher.

St Aidan’s National School in Bawnboy currently has 48 pupils enrolled for next month but needs 51 students by September 30th in order to retain a third teacher. Bawnboy village and the surrounding area has a population of around 250 people.

Principal Ann Maguire, who has worked at St Aidan’s for the last 12 years, said it would be “very difficult” for herself and one other teacher to cater for four classes each.

“You would probably try to do as much oral work as a group as possible... A lot of juggling would have to go on,” she said.

“They’re not going to get as much one-to-one interaction as they would have in a smaller class. The children here are fantastic and they look out for each other but the teacher can only do so much. You just don’t have the same time to spend with each child.”

The community has placed an advertisement in a national newspaper and also started a Facebook group to attract families to the area.

“The big selling part is the beautiful scenery, it’s a lovely, tranquil part of the country. It’s only about 25 minutes from Cavan town and Enniskillen and about two hours from Dublin,” Ms Maguire added.

“There’s a multitude of different organisations for young children to take part in activities.”

Isabel Duggan Rofé, whose family are from the area, moved to Bawnboy from Dublin over 10 years ago.

“I just found the more I came down at the weekends, the more I kind of fell in love with the place,” she said.

“We’re trying now to see if we can entice people to begin in Bawnboy again. There’s so much to offer for people who might be looking for a change in environment, a slower or different pace of life. It’s probably cheaper than living in some of the other towns and cities.”