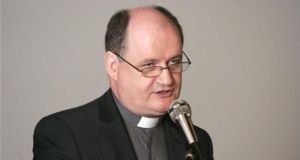 Executive chairman of the Catholic Schools Partnership Fr Michael Drumm said there was a role for Catholic schools to be ‘relevant as a counter-cultural voice’. Photograph: Dara Mac Dónaill/The Irish Times

The educational office of the Catholic Bishops is encouraging its schools to be more assertive in upholding religious values to avoid becoming “secularised from within”.

In a document published today on the church’s future in second-level education, the Catholic Schools Partnership (CSP) says religious education should not be reduced to a branch of the “social sciences”.

“To equate all religions is, in a real sense, to empty them of any significance,” it says.

The document also argues that Catholic secondary schools are “severely disadvantaged” in terms of state funding, citing an ESRI report last year which showed the extent to which such schools were dependant on voluntary contributions to remain open.

Fr Michael Drumm, executive chairman of the CSP, said “the argument for more funding is not the key aim [of the document]; the central aim is to awaken consciousness of the significance of the voluntary sector.”

He said it sought to “provide schools with a process to reflect on their identity”, and also to highlight the distinct contribution of voluntary schools to society.

The CSP was founded by the Irish Bishops’ Conference and the Conference of Religious of Ireland in 2010 to foster “coherence in Catholic education” and support its school trustees.

The report “Catholic Education at Second Level: Looking to the Future” notes that over the past 25 years, the number of voluntary secondary schools has fallen from 493 to 374. Some 344 of those remaining are Catholic.

The rest of the second-level sector is made up of 254 so-called state schools, governed by Education and Training Boards, with Catholic involvement in management in a minority of cases; and 95 community and comprehensive schools of mixed patronage.

Calling for a renewed commitment to ethos, Fr Drumm said: “There is a danger – or a trend – all over Europe and particularly in second-level that schools can become secularised from within. There is a certain inevitability to that unless they pay attention to their voluntary status.”

There was a role for Catholic schools “to be relevant as a counter-cultural voice”, he added. “I think there is a way of being Catholic that is very inclusive and would not be a closed door.”

At its core, the document encourages parents and boards of management to ask: “Why do we have Catholic schools?”

It suggests that they draw on a number of factors, including the inspiration of “Jesus the teacher”, the role of schools in intercultural dialogue, the principles of Vatican II, and the notion that Catholic schools respect both faith and reason.

On the latter, it says, “faith and reason can live and thrive in the same person... There is no contradiction between being a fully educated person and a committed Christian.”

At the same time, religious education “deals with ultimate questions” and as such is afforded special status.

“Since religion deals with matters of fundamental, ultimate concern it follows that the religious response has a priority in all one’s subsequent reasoning and deliberation.”

On finance, the report says “there are serious concerns about the workload carried by principals in Catholic secondary schools as a result of increased administrative burdens and recent cuts in resources... Such a scenario is unsustainable”.

In its report, the ESRI identified a “significant gap” - estimated at about 30 per cent - between the funding of faith-based schools and state schools. Unlike state schools, trust companies have to pay a number of running costs themselves, including secretarial assistance, management of building projects and insurance.