Baptism: badge of identity or passport to education? 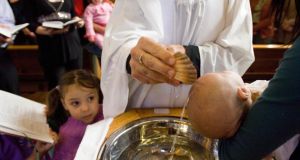 It is a noisy baptism day at a church in north Co Dublin. Parents, godparents, grandparents are gathered in the pews, resplendent in Sunday-best suits and colourful dresses.

Some of the parents are trying their best to keep control of their children. An older child is chewing on popcorn; another is absorbed with a game on a smartphone.

The priest, valiantly, explains how the sacrament of baptism is the most basic of all and the very basis for the Christian way of life.

“It’s like a day out at the movies,” says one less-than-impressed member of the congregation. “You’d wonder if some of the families have ever been in a church before.”

They’re sentiments Fr Gerry O’Connor is familiar with. He’s a priest in Cherry Orchard parish, a working class area where regular mass attendance is as low as 2 per cent of the Catholic population.

Yet the numbers who turn out for baptism, he estimates, could be approaching anywhere close to 90 per cent.

“It’s a tradition, a ritual. It’s a way of bringing the family together. I think that’s why we’ve an incredibly high turnout for baptisms,” he says.

“Some people who aren’t familiar with baptisms might think it’s noisy or children aren’t well-behaved. I enjoy the enthusiasm of it all. There might not be great religious practice, but people still feel a strong sense of connection to the church.”

The popularity of baptisms is replicated in dioceses right across the country. Despite tumbling church attendance and a dramatic rise in the number nonreligious marriage ceremonies, baptism remains highly popular.

An Irish Times family values poll earlier this year indicated up to 93 per cent of parents baptised their children, while only a third of children were taken to mass regularly.

Official figures appear to reflect this. In 2003, 64,249 baptisms took place on the island of Ireland, according to Annuarium Statisticum Ecclesiae, the Catholic church’s statistics yearbook. A decade later, the figure had risen to 67,937 baptisms.

The reasons for Ireland’s high baptism rate are hotly disputed.

In a country where 96 per cent of primary schools are under religious patronage, a nonbaptised child faces the prospect of languishing towards the bottom of an oversubscribed school’s admission list.

Campaigners in favour of equal access to education say a significant proportion are likely to be “baptisms of convenience” among nonpractising parents, desperate to secure a school place for their child.

Late baptisms, in particular, are sometimes sought by parents who suddenly realise certificates are needed to meet the entrance requirements of oversubscribed schools.

“For nonbelievers, is it hypocritical? Yes. Do I sympathise? Yes. I completely understand in the circumstances.”

Members of the clergy have a different explanation: high baptism rates shows how deeply entwined the church remains with people. People may be moving away from regular Mass attendance, but they will want to preserve the rituals of faith.

The resilience in baptism numbers, say many priests, speaks to something much deeper like a sense of identity, a badge of belonging and a feeling of place.

Fr Joseph Mullan is based in the parish of the Three Patrons in Rathgar, where some of the most oversubscribed schools in the country are located.

Parents are required to go through a prebaptism course in the week before a baptism.

He acknowledges that many are not regular mass-goers and need to be educated about the fundamentals of the sacraments.

“When I meet with couples, I ask them where the oil of catechumens [used to anoint children in baptism] comes from. Generally, no one can answer me. One person said Spar,” he says, laughing.

“When I meet couples, in 90 per cent of cases they choose names of parents or grandparents. So there is a sense of tradition – and belonging. And baptism is the start of that sense of belonging. Even if someone doesn’t practice, they have a sense of identity with the church.”

Not far away, in the parish of Balally, Fr Dermot Lane says there can be suspicions about the motives for baptism, especially if a couple is baptising an older child aged three or four.

That’s because many oversubscribed schools seek baptism certs from parents in the year before enrolment.

“It doesn’t happen often,” he says. “I can understand why parents would do it, but I am totally opposed it. It’s a deception. But more importantly, it brings the sacrament into disrepute. It’s bad practice and totally against what we’re trying to do in the parish.”

“You’d inquire diplomatically about why they’re baptising a child now . . . During the course of instruction, you might make it clear that this is not a passport to an education system.”

Despite the popularity of baptisms, the rise in civil marriages is a source of alarm for many in the clergy. About 30 per cent of marriages are nonreligious. Priests worry it may be the beginning of longer-term separation from the church.

Fr John Hassett, however, says there is evidence that many who have civil weddings go on to baptise their children in church. Based in Adamstown, in west Dublin – one of the fastest growing areas of the country – his parish has about 600 baptisms in a year. The local baptism form asks couples where they got married.

“What surprised me was that about 25 per cent of parents said they weren’t married in a church. But they still wanted their child to be baptised. It’s still a rite of passage for their children,” he says.

He, too, gets the occasional phonecall from a parent seeking a baptism in cases where it’s clearly for educational reasons.

“I understand their dilemma, but my answer is for them to honour their own integrity.”

Among nonbelieving parents who have baptised their children, few say they would ever raise it with a priest.

“The nearest nondenominational school was half an hour away out of town. And I knew we wouldn’t get in any way . . . It was slightly embarrassing, but it was just pragmatic.”

Suzanne, in her mid-30s, says she opted to baptise her child partly on the basis of her parents’ beliefs.

Even though she no longer believes, the strong religious upbringing she received has left its mark.

“I can’t ignore the fact that I was raised as a Catholic. I can’t turn my back on that belief structure that was ingrained from the word go.”

But many nonbelievers can’t bring themselves to justify baptising their children to enhance their access to school.

Andrew Howley and his partner grew up as Catholics but haven’t practiced since they were teens. They have opted not to baptise their children, aged four years old, two years old and six months.

Living in the Harold’s Cross area of Dublin, he knows their decision is storing up potential problems in finding a school place but feels anything else would be hypocritical.

“I was raised a Catholic but lost that faith in my late teens. The rest of my family are practising, and that’s fine, that’s their gig. But baptism never really felt like an option.”

One of the funerals was held in his church. Many youngsters in their late teens or early 20s weren’t mass-goers. Yet, he says, felt a sense of belonging to the church at a time of loss.

“They were totally at home, they were happy to be here – that identity is tangible and real.” he says.

“You can’t remove it with a surgical scalpel and you can’t invalidate it by not going to mass.”

For Fr Hassett, he believes Catholic society may well move in the direction of other faiths that have broad notions of religious identify.

“I think its similar to the way the Jewish communities celebrate Passover. Many aren’t committed practitioners. But it’s a big social and cultural occasion, as well as a religious one. . .

“I’m not cynical about it. Some are. But I think there are still a lot of complexities that we haven’t worked through.”