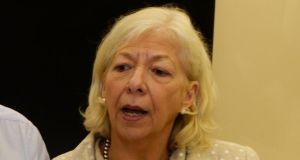 The Association of Secondary Teachers Ireland (ASTI) voted down the deal by a margin of 74 per cent to 26 per cent. However, less than a third of members (31.5 per cent) cast their ballots.

The Teachers’ Union of Ireland (TUI), which represents a smaller number of secondary teachers, has rejected the deal by 92 per cent to 8 per cent, with almost twice the turnout (60 per cent) of members.

The ASTI’s key decision making body, the 23-member standing committee, will discuss the outcome of the ballot at meetings on Thursday and Friday.

The union has yet to decide whether to be bound by the decision of the Irish Congress of Trade Unions - of which the ASTI is part - to accept the agreement, which allows for restoration of pay in return for productivity concessions.

The TUI passed a motion at its annual congress at Easter not to bound by the collective decision, setting up the prospect of a conflict with the Department of Education and Skills over working arrangements.

“Teachers have taken significant cuts in pay in recent years. Working conditions have deteriorated through a combination of reduced resources and additional demands on teachers’ time.

“Young teachers have been disproportionately affected due to the introduction of new pay scales and new pension arrangements. In addition, part-time teachers, who do not earn a full salary, will not benefit from the January 2016 pay increase,” she said.

The department has allocated €43 million in Budget 2016 for pay restoration for teachers next year under the Landsdowne Road deal.