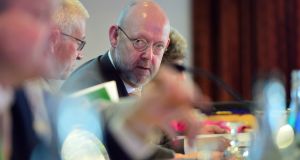 the union is in danger of losing members over its opposition to junior cycle reform.

Delegates at its annual convention in Cork voted this week to deepen their opposition to the reforms by directing members not to co-operate in any form of classroom-based assessments linked to the State exam.

While the ASTI remains in dispute with the Government, the other main secondary school teachers’ union, the Teachers’ Union of Ireland (TUI) , voted last year to accept the reforms. This means classroom-based assessments will be rolled out this year in one in four secondary schools staffed mainly by TUI members.

Delegates told the ASTI’s convention of “intimidation and bullying” in schools which have members of both unions in relation to the new reforms.

She said she was aware of cases where a member had switched to the TUI to take part in training linked to the new reforms.

The ASTI’s general secretary, Kieran Christie, said there was no evidence to suggest members were leaving to join the TUI over the issue.

In a statement, the TUI said it was completely unaware of any such situation.

Another delegate, Declan McInerney, said new recruits were in danger of coming under particular pressure not to join the ASTI.

“What’s to stop someone asking them, ‘are you willing to assess your own students?’ How could someone refuse?”

Noel Buckley, a member of the union’s central executive committee, said about 3,500 of the union’s members were in dual-union community and comprehensive schools, one of the fastest-growing categories of secondary school. “That represents about 20 per cent of our membership and that number is set to grow . . . If we want a future as a union, we have to listen to that voice.”

What’s the difference between the Dáil and a bag of mice?