Lack of action on salaries, conditions and reform may lead to industrial relations chaos 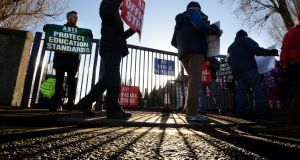 Both second-level unions also will consider motions this week calling for ballots for industrial action to secure equal pay for teachers recruited after 2011. Photograph: The Irish Times

You could be forgiven for assuming there is not much at stake in this year’s series of annual teacher conferences.

After all, there’s no minister for education available to run the gauntlet of teachers’ ire.

There’s no sign of a new government on the horizon. And any significant policy developments from the Department of Education are in lock-down.

The result, at least to the outside, will be teachers talking to themselves about issues ranging from pay to working conditions and education reform.

But if there is to be industrial trouble in the public service later this year, chances are teachers will be at the heart of it.

The clock is ticking on a series of sensitive issues that could escalate into time bombs for a government if not defused sooner rather than later.

In the case of the Association of Secondary Teachers in Ireland (ASTI), there is the possibility of industrial action on three separate issues. In the case of junior cycle reform, the union’s members rejected the proposed changes in a ballot of its members last September.

This week a motion will be debated which – if approved – would further deepen the union’s opposition to the reforms.

The ASTI is planning a series of strike days to take place from this autumn if the dispute is not resolved soon. While it secured most of its objectives, it says it still has existing concerns including the lack of an externally assessed oral exam in modern languages and Irish, along with increased workload and bureaucracy for teachers.

The other big flashpoints include 33 additional hours a year which teachers have had to work under the terms of the Croke Park agreement, as well as the planned restoration of payments for supervision and substitution duties in school from next September.

Both the ASTI and the TUI rejected the new Lansdowne Road agreement on public service pay which was backed by a majority of public service unions last autumn and which came into effect in January.

Technically, the Haddington Road deal does not formally expire until next June.

The question for the ASTI and TUI is what happens then, given that their members have rejected the follow-on Lansdowne Road accord.

Financial emergency legislation introduced by the Government last October provides for the introduction of payment for supervision and substitution duties from next September – about €1,600 to be paid in two tranches this year and next year – to members of unions that have signed up to collective agreements.

Given the rejection of Lansdowne Road by the ASTI and TUI, the risk to these payments would seem obvious.

Both second-level teaching unions have motions before their respective conferences next week calling for their withdrawal from supervision and substitution duties if this money is not paid as agreed.

Any withdrawal from supervision and substitution duties would more than likely lead to the closures of schools.

Both the ASTI and TUI will debate motions proposing that teachers should cease working the additional 33 hours on the formal expiry of the Haddington Road deal in June.

These increments can be worth more than €2,000 depending on where individual teachers are on their pay scale.

There has been speculation that the Government would not risk industrial warfare with teachers for the sake of an additional 33 hours per year which do not generate substantial savings in any event.

However, any decision by the Government to allow teachers to cease working unilaterally the additional hours would be closely watched, for example, by nurses.

The pay gap between newly qualified teachers is another issue that will dominate the three conferences, especially the INTO (Irish National Teachers’ Organisation) congress.

While the union has been vocal on the issue and secured key concessions, some newly qualified teachers feel it has not been taken seriously enough.

Both second-level unions also will consider motions this week calling for ballots for industrial action to secure equal pay for teachers recruited after 2011.

Whatever about the outcomes, one thing is increasingly clear: the longer there is no minister in place, the more difficult it will be to defuse many of these time bombs primed to go off in the autumn.