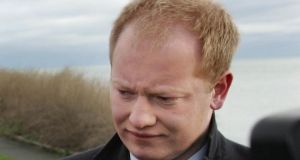 A Labour councillor and nephew of the Minister for Education Ruairí Quinn has been elected Lord Mayor of Dublin.

Oisín Quinn said he was “honoured” to be elected to the role and said his main objectives as mayor would be to promote Dublin as a gateway to Europe for business, a family friendly city and one that embraces diversity at all levels of society.

Meanwhile a 74-year-old grandmother who described herself as “always the bridesmaid” in mayoral elections, became the 817th mayor of Limerick last night.

Independent Cllr Kathleen Leddin, is the longest serving member of Limerick City Council never to have held the office of mayor.

The mother of four, who also has four step children, is the widow of former Mayor of Limerick and Fine Gael Councillor Tim Leddin who died in 1999.

Also yesterday, an 82-year-old independent councillor and former soccer player was elected Mayor of Donegal. Ian McGarvey from Ramelton had a successful career with Finn Harps, Sligo Rovers and his local club Swilly Rovers, whom he captained to FAI Junior Cup success in the 1960s.

In Kilkenny Fine Gael councillor Martin Brett was elected as mayor of the borough council, the last such appointment ahead of the planned abolition of the council in 2014. The outgoing mayor of Kilkenny Borough Council, Labour’s Seán Ó hArgain described the planned abolition of the council as a “travesty” and appealed to Minister for the Environment, Phil Hogan and the Government to overturn the decision.

1:53 WHO - Covid-19 surge in Ireland due to increased social mixing