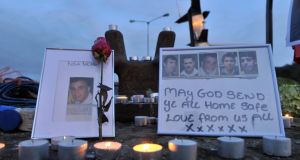 The shrine on Union Hall pier, west Cork, during the search for the missing crew of the trawler Tit Bonhomme. Photograph: Daragh McSweeney/Provision

Serious issues arising from the emergency response to the Tit Bonhomme sinking have prompted a review of the 999 service by the Department of Communications, Energy and Natural Resources.

Full details of that initial response was revealed at the recent inquest into the loss of five crew on board the vessel when it was confirmed that not one, but two, emergency calls were made from the vessel as it sank off Glandore, west Cork, in January 2012.

It is understood that neither the Irish Coast Guard, which is responsible for search and rescue, nor the Marine Casualty Investigation Board, which undertook the State’s official inquiry into the sinking, were aware that two emergency calls had been made.

Both were made from a mobile phone owned by the youngest crew member, Kevin Kershaw, as the vessel’s VHF radio was no longer working.

‘Garbled’ call
The lack of information picked up by the operator taking the first call was described as “extraordinary” at the inquest by barrister Elizabeth O’Connell, for skipper Michael Hayes’s widow Caitlín Uí hAodha.

The timeline in the official report had recorded one “garbled” 999 call received at 5.49am on January 15th, 2012, and lasting three minutes and 20 seconds, relayed from an operator to Valentia Coast guard, which indicated that a vessel was sinking at the entrance to Glandore Harbour.

In fact, two calls were made, at 5.46am and 5.49 am, according to recordings played for the jury at the inquest, and the first call was transferred to Bandon Garda station rather than to the Irish Coast Guard.

The two calls were received by Ecas, the Emergency Call Answering Service, which is run by BT Ireland on contract from three centres in Ballyshannon, Co Donegal, Navan, Co Meath, and Dublin.

In the first call, received at Ballyshannon, “helicopter” and “Union Hall” were mentioned three times, while “Tit Bonhomme” was mentioned once.

The call operator rang Bandon Garda station after tracing the call to a phone mast in west Cork and informed a garda that there had been no direct service request or location confirmed. The garda was put on the line to the crew but could get no details.

Helicopter on standby
The second call was received by the Ecas Dublin centre at 5.49am and lasted just over three minutes. This call was transferred to the Irish Coast Guard at Valentia, Co Kerry, at a time recorded by the MCIB report at 5.53am.

It tasked the Shannon-based search and rescue helicopter and put the Waterford-based helicopter on standby between 5.54 and 5.55am.

The Department of Communications said it evalued the 999 response shortly after the sinking and was “satisfied” that it “had performed satisfactorily”. However, it said that following completion of the inquest, the department and Ecas were “currently reviewing the response to this tragedy again”.

The department added: “More generally, the service is under constant review as we seek to ensure the best possible response to incidents.”

Irish company paid €1.2m a year by collapsed Blumenthal-linked Australian restaurant 03:45
Hugo MacNeill steps back from Goldman Sachs role 03:15
Most dangerous stretches of road for motorists are all located in Dublin 03:00
One of Ireland’s largest law firms has no office here 02:45
Public funds of €25m sought for Dublin library 01:38