We should avoid politicising our Supreme Court 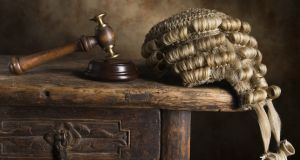 The Irish and US Constitutions both recognise a right to same sex marriage. While the Irish decision was a result of over a million “yes” votes, the US decision came down to the vote of just one man.

Justice Anthony Kennedy, who was appointed to the US Supreme Court by former Republican president Ronald Reagan, joined the four judges appointed by Democratic presidents to rule the Constitution required recognition of gay marriage. Four judges, all Republican appointees, dissented.

Two features of the approach of the US Supreme Court to “hot button” political issues like this should give pause for thought to Irish lawyers, particularly in the light of recent constitutional changes here. The first is the vehemence of the dissenting opinions. Chief Justice John Roberts, who dissented, said the majority decision had “nothing to do with the Constitution”. Justice Antonin Scalia said the decision involved a “judicial putsch”, claiming the judgement lacked “even a thin veneer of law”.

But this is not a one-off case of dyspeptic conservative judges unable to accept defeat. Liberal judges have dissented from conservative majority decisions with language that was equally vehement and that also questioned the majority’s sincerity. In his dissent from the 5-4 decision to award George W Bush the presidency in 2000, Justice John Paul Stevens said it “can only lend credence to the most cynical appraisal of the work of judges throughout the land”. Similarly, Justice RuthBader Ginsburg suggested the majority’s restrictive interpretation of legislation aiming to stamp out racial discrimination in voting contained “disturbing lapses” and was without care or seriousness.

For good reason. The courts are the branch of government with the weakest democratic credentials. Being insulated from politics, they rely on the idea their decisions are not merely politics dressed up as law but are, to some degree, the result of legal expertise rather than political preference. Judges lack means to enforce their decisions themselves and any perception that judicial rulings are illegitimate is highly dangerous for the courts as an institution. When the Chief Justice of the Supreme Court openly doubts the legitimacy of rulings of their court, the danger for the rule of law should be apparent.

A second feature of the US system is the degree to which judges become public figures. Kennedy has achieved celebrity as the famed swing vote between the court’s liberal and conservative wings, while debates between the liberal Ginsburg and the conservative Scalia have even been made into an opera.

The personalisation of the judicial role can be seen in a tendency to write eloquent and catchy opinions. In the gay marriage decision, Scalia openly mocked the “straining to be memorable” rhetoric of Kennedy’s opinion stating the court had “descended from . . . disciplined legal reasoning . . . to the mystical aphorisms of the fortune cookie”.

The Irish Supreme Court has similar powers to its US counterpart. But Irish judges are not public figures in the same way as their American colleagues. In addition, the nomination process for Irish judges does not involve public parliamentary hearings and judges’ decisions cannot be predicted by the political complexion of the government that nominated them.

Judges may now issue dissenting opinions in such cases. This increases the scope for judges to carve out the kind of public profile on controversial issues that one sees in the US, with the consequent risk of politicisation.

The European Court of Justice also has a rule preventing the issuing of dissenting opinions. It must be noted one-judgement rules do reduce the eloquence of rulings. Indeed, EU lawyers complain some European Court judgments read as if written by a committee. However, such rules prevent the development of celebrity judges and remove the temptation for judges to engage in “show boating” by seeking to write judgements that will generate praise amongst the public or in legal publications. The politicisation of the US Supreme Court poses real dangers to its authority. We must hope allowing dissenting opinions in relation to constitutional challenges in this country does not contribute to a similar politicisation of our top court.