‘Viable’ device on Cavan estate made safe by Army 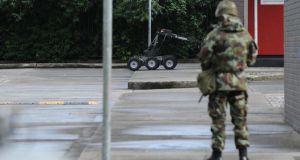 Families were evacuated from their homes in a Co Cavan estate yesterday as an Army bomb disposal team dealt with a device which was discovered at a house in Cootehill.

Residents in Drumnaveil Park were shocked after gardaí visited their homes to inform them of the suspicious device.

The estate was cordoned off while gardaí and the bomb disposal team dealt with the device. Cootehill Fire Service remained on standby.

Later yesterday gardaí said the “pipe bomb-type” of device found was similar to one which was left near a rural premises in south Monaghan some months ago. No one was arrested in connection with that incident.

“A cordon and road closures were put in place for public safety and a number of nearby houses were evacuated. The team arrived on the scene at 11.55am. The device was found to be viable and was rendered safe by a controlled explosion. ”

The scene was declared safe at 2.40pm.