Report criticises lack of supervision and inadequate management within the force 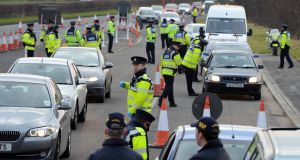 His comments in Silicon Valley, California, on Thursday followed the Policing Authority’s release of its independent review of the falsification of figures on Wednesday.

“I think at this stage we’ve had several reports on breath-testing. I don’t think we need any more reports. At this stage we have a fairly good idea what happened. It shouldn’t have happened,” Mr Varadkar said.

“At this stage we need two things. We need individual accountability and it’s important that the Garda Commissioner, who is going to meet with the Policing Authority, moves on that.

Earlier, Government Ministers insisted disciplinary action would be taken against individual gardaí if evidence of wrongdoing had occurred.

Minister for Justice Charlie Flanagan and Minister for Transport Shane Ross urged Mr Ó Cualáin to outline what sanctions would be applied to members of the force found to have exaggerated breath-test figures.

Mr Ross told The Irish Times there could be no excuse for the endemic falsification of Garda figures or for the failure of 14 Garda divisions to investigate the matter.

There cannot be one law for the gardaí and one for others, Mr Ross insisted.

“I think we are all in agreement that there should be some form of sanction where there is prima facie evidence of wrongdoing, whether that is a criminal investigation or disciplinary action is a matter for the commissioner.”

The authority advised the scale of the discrepancy was larger than previously thought.

It also criticised the lack of supervision and inadequate management within An Garda Síochána that allowed the issue to persist for a number of years.

The authority met officials from the Departments of Transport and Justice on Thursday to outline its concerns over the complex legislation governing road policing.

Mr Ross told The Irish Times he accepted the criticisms contained in the report and was committed to consolidating all individual road traffic Bills into one piece of legislation.

Mr Flanagan said the report unveiled an unacceptable culture of carelessness in the force.

He insisted there would be radical change within An Garda Síochána and the authority’s recommendations would be accepted in full.

“The report once again underlines what has been a particularly bleak chapter in An Garda Síochána,” Mr Flanagan said on Thursday.

“An unacceptable catalogue of major deficiencies and an unacceptable litany of instances of very bad behaviour on the part of the gardaí.

“There is a process under way under assistant commissioner Michael Finn where he will assess the situation as far as responsibility is concerned.”

Mr Flanagan said he agreed with the chair of the authority Josephine Feehily that this was an issue that needed to be pursued.

He said he understood the Mr Ó Cualáin would report to the authority on that process before the end of November.

The authority’s report was released two months after the gardaí issued its own internal audit on the same matter.

Fianna Fáil called for the Garda watchdog to be given more powers and resources to oversee the work of the force. The party’s spokesman on justice, Jim O’Callaghan, said he would progress legislation to compel gardaí to inform the authority of all internal audits and reports.