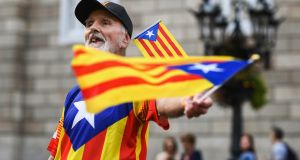 The policy committee for Dublin City Council has recommended that the Catalan flag be flown over Dublin City Hall for a month-long period.

Councillors on the committee this morning voted seven to five in favour of flying the flag.

The successful motion was put forward by People Before Profit councillor John Lyons, and will now progress to a vote at the December full council meeting for final approval.

The exact wording of the motion is as follows: “In solidarity with our twin city of Barcelona this Council condemns the Spanish government’s repression and violence perpetrated on citizens exercising their democratic right to vote and as such, in an act of solidarity and in recognition of this universal right to democracy and self determination as established by international covenants, we agree to fly the Catalan flag over City Hall for one month.”

It makes reference to the violent suppression of a plebiscite on Catalan independence by Spanish authorities last month, which set in train a sequence of events leading to a unilateral declaration of independence from the autonomous Catalan government and the proposed introduction of direct rule for the region.

The motion itself was formulated by People Before Profit councillor Tina MacVeigh, who has visited the region twice over recent weeks in her capacity as an international observer.

Ms McVeigh is expectant that the proposal will be ratified by the full council, and said it represents an important message.

The Spanish embassy in Dublin has not yet responded to requests for comment from The Irish Times on the motion.

Mr Lyons was also the proposer for a separate suggestion earlier this year to fly the Palestinian flag over Dublin City Hall in “solidarity with the people of Palestine living under occupation in the West Bank and Gaza”.

That motion was carried in a move which drew the ire of the Israeli ambassador to Ireland, who warned that the gesture would be “highly politically charged” and risked sending a negative message to Israelis living in Dublin.

The flying of the flag may draw a similar rebuke from Spanish representatives in the State after the country issued charges of sedition and rebellion against deposed Catalan regional leader Carles Puigdemont and other supposed ringleaders of the independence movement.

Meanwhile, members of the Palestinian movement in Ireland are to hold a protest outside the British Embassy in Dublin this afternoon in recognition of the centenary of the Balfour declaration, which proposed the establishment of a Jewish homeland in the then British-controlled territory of Palestine.

Demonstrators will deliver a letter to British ambassador Robin Barnett criticising recent utterances from UK prime minister Theresa May in support of Israel, and the holding of celebratory events to mark the anniversary.