UK plan to scrap human rights act ‘not thought through’ 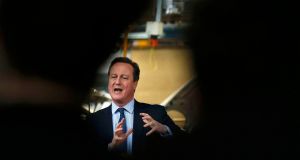 British prime minister David Cameron: the Conservative Party’s proposals are focused on replacing the Human Rights Act (HRA) with a British Bill of Rights, which would reduce the role of the convention in the UK. Photograph: Andrew Yates/Reuters

The UK government has not engaged meaningfully with the consequences of its planned repeal of the Human Rights Act on devolved administrations, says a report for a European Parliament group.

Whether the proposed changes will breach the Good Friday Agreement cannot be properly evaluated until a model for the new regime is put forward, said the report commissioned by a group of mainly left-wing parties in the parliament.

The Good Friday Agreement required the British government to incorporate the European Convention for the Protection of Human Rights and provide remedies before the courts for breaches of it in Northern Ireland.

The report said the British government’s proposals have repeatedly linked the HRA directly with the EU, conflating the two systems to increase the appeal of the reform to Eurosceptics. It said there are nuanced and complex links between proposals to repeal the HRA and a possible UK withdrawal from the EU.

Because the Good Friday Agreement constitutes part of an international treaty between the UK and Ireland, any possible breaches of it may constitute violations of international legal obligations and may have negative consequences for the uniformity and reciprocity of human rights protections.

In the Republic, the 2003 European Convention on Human Rights Act requires courts to interpret the law in line with the convention as far as possible, and provides for the courts to make declarations of incompatibility regarding convention breaches. Unlike findings that laws are unconstitutional, findings of incompatibility have no effect on the validity of a law. The act was introduced as part of the Good Friday Agreement to ensure human rights protection here is at least as good as it is in the North.

The report on proposed changes to the UK’s human rights regime was prepared by Doughty Street Chambers, London and KRW Law in Belfast, and commissioned by the EU Left/Nordic Green Left group, of which Sinn Féin is a member.