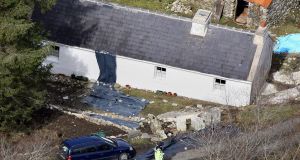 An aerial view of the dilapidated house near the village of Glenties, Co Donegal, where former Sinn Féin member and British spy Denis Donaldson was murdered in 2006. File photograph: Paul Faith/PA

Two men have been arrested in connection with the murder of Denis Donaldson in Co Donegal 10 years ago.

Mr Donaldson was killed at Cloghercor, Doochary, by the Real IRA in 2006 after it emerged he had been an MI5 informer.

In a statement on Tuesday night, gardaí said two men, one aged in his 40s and the other in his 60s, had been arrested and detained at Letterkenny Garda station for questioning.

Earlier this year, Mr Donaldson’s family said they were taking a High Court action over the continued adjournment of his inquest, which they said was an unlawful breach of their rights.

The Real IRA subsequently claimed responsibility for the murder.

A former senior Sinn Féin official, Mr Donaldson had confessed to spying for Special Branch in Northern Ireland and the British secret service just months before he was killed.