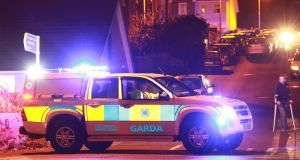 Image from the scene in the village of Omeath, Co Louth. Photograph: Nick Bradshaw

A man who shot dead a garda at a domestic disturbance has died in the same incident. The man is believed to have turned his gun on himself.

The 24-year-old, who was known to gardaí and the PSNI, also injured his partner with whom he lived at the Mullach Alainn estate near Omeath, north Co Louth.

The woman was tonight fighting for her life and Garda sources said there were grave concerns for her.

The Garda member was a married father of three children.

The incident that left the garda and the man dead unfolded at about 6pm.

The Irish Times understands the woman had gone to gardaí and expressed her fear that her partner was going to kill her and himself.

The gardaí escorted her to the property to collect her personal items. When the woman entered the home, the man shot her. The Garda followed the woman into the bedroom, where he was fatally shot with a handgun.

The man who fired the shots is believed to have killed himself after seriously injuring his partner.

Medical care was called for, with a number of ambulances rushing to the scene on the Cooley Peninsula.

Though paramedics tried to save the garda’s life he was pronounced dead a short time later. The woman was removed to hospital.

President Michael D Higgins contacted the Garda Commissioner to express his sympathies on the “terrible loss of a young member of the Force, while doing his duty on behalf of the State and all of society”.

“This most serious and tragic incident has not only led to the death of a member of An Garda Siochána, while on duty, but tragically has also involved the death of one and the serious injury of another person,” Mr Higgins said.

Minister for Justice Frances Fitzgerald said she was “appalled” by the killing of the garda.

“The fact that a Garda has laid down his life while protecting the community is a cause of great sadness. His death will be mourned by the entire nation, grateful for the service which he gave to it.

“While no words at this time can be expected to console his wife and children, his family, his colleagues and all who loved him, they know that he gave his life in the best traditions of An Garda Síochána protecting the community he was so proud to serve.”

A statement from Garda Headquarters said: “Gardaí at Dundalk are investigating a shooting incident which occurred at a house near Omeath Co Louth at approximately 6pm this evening, Sunday October 11th.

“Two people (adult males) have been fatally injured and one adult female seriously injured as a result of this incident. We can confirm that one of the deceased was an on duty member of An Garda Síochána.

“The scene is currently preserved pending a Garda technical examination.”

“I am deeply saddened to hear of the death of my colleague in a fatal shooting incident this evening while carrying out their duties,” she said.

“At this time my thoughts and prayers and those of the entire Garda service are with his family, friends and colleagues.

“This incident highlights the unique nature of the job carried out by the men and women of An Garda Siochana, and the dangers they face every day.”

The Garda Representative Association (GRA) said it was “shocked and saddened by the awful news”.

“This dreadful, dreadful news is the deepest fear of every police family. This puts everything we do into perspective,” said GRA president Dermot O’Brien.

“At this time of distress, the garda family will be doing everything possible to support the late garda’s relatives and loved ones, friends and colleagues.”

Garda sources said the force had requested assistance from the PSNI in the immediate aftermath of the shooting. The same sources said a PSNI helicopter supplied air assistance.

The scene of the shootings was sealed off immediately the incident unfolded.

It was expected the property where the killer and his injured partner lived would undergo an examination by members of the Garda Technical Bureau for a number of days.